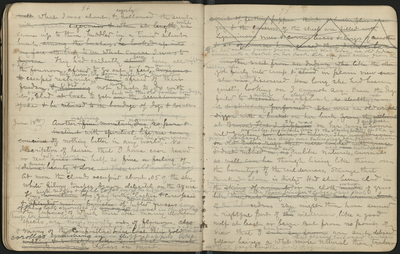 [well] what I was about, & eagerly followed the scent [with great eagerness & when at length] until we came up to them, huddled in a timid silent bunch [among the bushes, he looked up into my face attentively to see what course I was to pursue]. They had evidently been [stood] here all night all the forenoon, afraid to go out to feed. Having [anxious to] escaped restraint they were like some people we know of, [& then] afraid of their freedom, did [& knowing] not know what to do with it, and seemed glad [at last] to get back into the old familiar bondage [on the accustomed yoke & be returned to the bondage of dogs & corral.]

June 18th} Another inspiring morning [fine mountain day, so pure & instinct with spiritual life we can conceive of] nothing better in any world can be conceived. No description of heaven that I have ever heard or read of seems [gives me] half so fine [[a feeling of [pure] divine beauty & Love. [as these wild mountain days]].

At noon the clouds occupied about .05 of the sky white filmy touches drawn delicately on the azure.

The high ridges and hilltops beyond the hooved locusts are now mountain tops gay with Monardella, Clarkia & coreopsis & tall [splendid waving panicles] of tufted grasses some of them tall enough to [sway and] wave in the gentle breeze like pines in stormwinds.

[a mist of feathery pappus. Birds & butterflies are gay & the caverns of the sheep are filled with Leguminous vines & cornus leaves & twigs of ceanothus & of course have ceased their dismal ba-a-a]

We had another visitor from Brown’s Flat today, an old Indian woman with a basket on her back. Like our first caller from the village she

[Another visit from an Indian who like the other] got fairly into camp & was standing [stood] in plain view [ere she was] when discovered. How long she had been quietly looking on I cannot say. Even the dogs failed to notice [discover] her stealthy approach, [so stealthy was it & skillfully performed. She was an old wrinkled Digger with a basket on her back, from the settlement at Brown's Flat I suppose] She was on her way, I suppose, to some wild garden probably for lupine leaves or the starchy petioles of the giant saxifrage. Her dress was Calico rags far from clean In every way she seemed sadly [for leaves & tubers. She was dressed in old calico rags that were loaded with grease & dust rubbed in, as] unlike nature’s neat [clean] well-dressed animals [as well can be] though living like them on the bounty[ies] of the wilderness. Strange that mankind alone is dirty. Had she been clad in fur [the skins of animals] or in cloth woven [made] of grass and shreddy bark like their Juniper and Libocedrus mats [like the mats they make of the rich brown bark of the Libocedrus] she might then have seemed a rightful part of the [this] wilderness, like a good wolf at least or bear. But from no point of view that I have found [can see from] are such debased fellow beings a whit more natural than the glaring tailored tourists we saw that frightened the birds and squirrels. [traders].