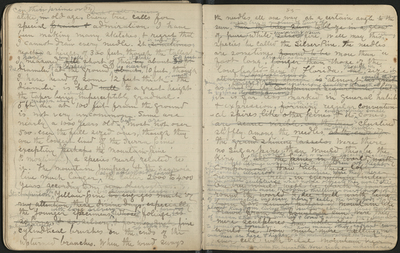 alike int their prime or [in] old age. Every tree calls for special [praise &] admiration. I have been making many sketches, & regret that I cannot draw every needle. It is said to [sometime reach[es] a height of 300 feet, though the tallest I have measured here falls [fell] short of this stature by about [30 ft] 50 feet or more. The diameter of the largest at the ground is nearly [about] 10 feet though

I have heard of some 12 feet thick or even 15. The diameter is held [well] to a great height the taper being almost imperceptibly gradual.

[5 ft dia [feet diameter] at 100 feet from the ground is not very uncommon. Some are nearly a 1000 years old – but most are not over 500 even the full sized one, [omit][though they are the longest lived of the Sierra pines excepting [perhaps] the Mountain-pine (P. monticola) a species nearly related to it. The Mountain Juniper & the Sequoia live much longer as I afterward found the latter 2000 to 4000years according to my own observations.]

Its companion the Yellow-pine is almost as large [too engages much of my attention these divine days, especially] the younger specimens with long silvery [whose] foliage form[ing] [is so long, & so silvery, & forms such fine] magnificent cylindrical brushes on the top shoots and the ends of the upturned branches. When the wind sways

the needles all one way at a certain angle [to the sun] every tree is a [glorious] tower of [then the trees seem to blaze in a glow of pure] white quavering sun [silvery] fire. Well may this shining species be called the Silver-Pine. The needles are sometimes [found to be] more than a foot long, almost as long as [longer than] those of the longleafed-pine of Florida. Though in [The] size attained by this species is almost as great as that of its companion sugar pine, but it is far less marked in general habit & expression forming regular conventional spires like other pines, & its cones are scarce visible on the trees clustered stiffly among the needles at the ends of the grand shining tassels. Were there no sugar pine, then would this be the King of the world’s eighty or ninety species, brightest of the bright waving wooshing tree children of light. Grand gold arrows silverrods [of pure sunfire]. Were they mere mechanical sculptures what noble objects they would still [seem] how much more, throbbing thrilling overflowing full of [fountain] life in every fibre and cell, the very Gods of the plant Kingdom, living their sublime century lives in sight of Heaven [and the stars] Watched and loved and admired from generation to generation forever. And how many other radiant rosing sun trees are here and higher up the mountains about the Yosemite region. Libocedrus, Douglas, Spruce, Silver Fir, Sequoia, etc. How rich our inheritance. [all the pines in the world, worthy companions. How rich these lofty

Sierras in trees - in everything indeed.

One tree would well be worth a journey round the world to see - well worth being born for. Living pillars of mountain life drawn from the fountain sun. Were they mere sculptures how noble objects they would be. How much more thrilling in ever[y] cell with true [vital] mountain vigor]