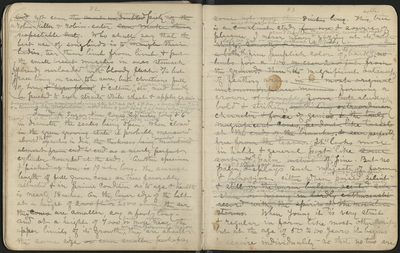 [And] not even [the most undoubted [genuine] piety of the] Can make robin-killer & robin-eater [can make them] Quite respectable [truly]. Who shall say that the best use of songbirds is to eat them [mangle their bodies], tear them limb from limb, & put the small breast muscles in ones stomach already overloaded and stripped with bloody flesh. 'Tis but race living on race to be sure, but Christians full of Love, [& "higher planes"], & "culture," and [transcendentalism] etc, need hardly be pushed to such straits while wheat & apples grow.]

Discovered another magnificent specimen of the Gold-[cup] Oak, 6 ft dia [feet diameter], a douglas spruce 7 feet and a twining lily (Stropholirion) with stem 8 feet long and 60 rode colored flowers. [Found a] Sugar-Pine cones are cylindrical sightly tapered at the end and round at base. Found one today nearly 24 inches long & 6 in diameter, the scales being open. When closed [in the green growing state] it probably measured about 3 1/2 [4] inches in dia. [the thickness being [mainly] maintained almost from end to end as a nearly perfect cylinder rounded at the ends]. Another specimen [I picked up here is] 19 inches long. The average length of full grown cones on trees favorably situated & in prime condition as to age & health is nearly 18 inches. On the lower edge of the belt at a height of [2000 ft or] about 2500 above the sea they [cones] are smaller, say a foot to fourteen inches long.

[some not more than 8 inches long]. This noble tree is an inexhaustible [constant] study [for me] & source of pleasure. I never weary gazing at its grand tassel cones, its perfectly round straight bole at 100 feet or more without a limb [noble shafts - smooth & round as if turned in a lathe] the fine purplish color of its bark, & [no limbs for a 100 or even 200 feet from the ground. Then] its magnificent outsweeping downcurving [of] feathery arms [in the most original uncommonplace manner] forming a crown [of variably form but] always[s] bold & striking and exhilarating. [exhibiting extraordinary character & force of genius, & the truly magnificent cones, pendant like tassels at the ends of the branches & seen perfectly free from the leaves.] In habit & general port it looks more like [some sort of] a palm than a [instead of] pine. But no palm that I have yet seen displays such majesty of form & behavior either When poised silent and thoughtful in calm warm sunshine, or wide awake waving in storm winds every needle quivering glad accord [waving and singing with the winds] [& still in the warm balsam scented sunshine or waving in lordly enthusiastic accord with the spirit of the mountain storms.] When young it is very strict & regular in form like most other conifers but at the age of 50 to 100 years it begins to acquire individuality - so that no two are