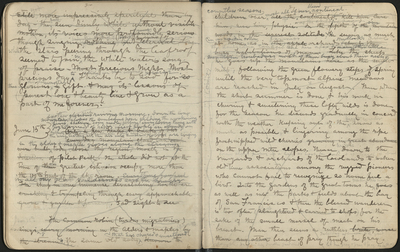 [still more impressively spiritual than by day - the fall seen dimly white without visible motion, its voices more profoundly serious though singing [only the old old and ever young hymns of] nothing but eternal love] while the stars peering through the leafroof seemed to join in the white water's song [of praise. Most] precious night. [Most] precious day to abide in me forever. Thanks be to God for [so [this] [glorious a] This glad immortal gift [& may its lessons of purest love & beauty live & grow as a part of me forever.]

June 15th} Another rich [glorious] reviving morning. Down the long mountain slopes the sunbeams pour gilding the awakening pines, cheering every needle, filling every living thing with joy. Robins are singing in the alder and maple groves [along with the streams] Myriads of happy insect people are [already] on the wing helping the birds and streams to sing, beating all the air into music.

[Only a few heaps & banks of our everyday mountain cloud landscape were built today above this region, mostly in the direction of Pilot Peak. The whole did not at the time of its [their] greatest extension occupy more than the 100th part of the sky room. Everything joyful in all our glad wilderness save the hungry

The sheep in one immense devastating horde are crushing & trampling through every approachable grove & garden & fernery. Sad sight to see]

[children] countless seasons over most all of our blessed continent [all the continent "Kill him, cure most all of our blessed continent him, give him, physic" as the children say In the depths of the [our] mountain woods, in the severest solitude,] He seems as much at home in the mountain hollow as in farmers [the apple] orchards Bullocks Oriole and the Louisiana Tanager are here also & many warblers & other little mountain troubadours most of them busy about their nests and {arrow} [about the busy habitations of man. Like the sheep (omit) he goes up the mountains here as the snow] melts, following the green flowery steps of spring until the very topmost alpine meadows are reached in July or August. Then when the short summer is done, & his work in cheering & sweetening these lofty wilds is donefor the season he descends gradually in concord with the weather keeping out of the first winter snow as much as possible & lingering among the ripe frost-nipped wild cherries growing in great abundance on the upper mountain slopes. Thence he goes down to the lower slopes picking up a living as best as he can and at length in [ ] vineyards & orchards of the lowlands to waken old time associations among the rugged pioneers who cannot fail to recognize so home feel a bird. Into the gardens of the great towns he makes his way [goes] as well as into the parks & fields about the bay of San Francisco & there the blessed wanderer is too often shot [slaughtered & carried to shops] for the sake of the small morsel of meat on his breast. Man then seems a ruthless brute, worse than any other beast of prey though he pray. Saturday afternoon in the great slaughter day for city dwellers good [that]. Let him pray and pray and pray as he may.