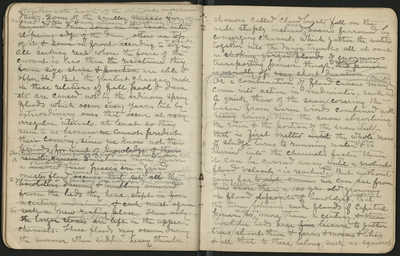 dam, together with parts of the older ones [being carried] some of the smaller boulders [masses far] are carried far down stream and variously lodged [beyond the dam, some on the lower outer sloping edge of the dam, others on top of it, & some in front] according to size and shape all seeking rest where the force of the current is less than the resistance they [from size shape & position] are able to offer [it]. But the greatest changes made in these relations of fall pool & dam etc are caused not by the ordinary spring floods [which occur every year] but by extraordinary ones that occur at [very] irregular intervals [at least so they seem to us because we cannot predict their coming, since we know not their periods for want of knowledge of their remote causes. Sometimes] The testimony of trees growing on flood boulder deposits show that more than a century has [hundred years] passed[s] since the last [ere a grand] master flood came to awaken everything movable to go swirling and dancing on wonderful journeys [occurs that sets all the [larger] bowlders dancing & tumbling onward from the beds they have slept in for a century undisturbed, & each must again [to] seek a new resting place. Then only the larger[est] stones [boulders] are left in the upper channels.] These floods may occur during the summer when sudden and heavy thunder

showers called, 'cloudbursts' fall on the wide steeply inclined river basins furrowed by converging channels which gather the waters together into the main trunks all at once in booming torrents [choking, gorged floods] of enormous transporting power though short lived [that power] is usually of very short duration

[Or a combination of flood causes may come into action in midwinter, such as a quick thaw of the snow covering the basin from warm winds combined with warm [heavy] rains.] omit [Then the snow absorbing the rain & the portion of the snow itself that is first melted until the whole mass of sludge turns to running water at once& is hurried into the channels faster than it can be carried away until a violent flood velocity is reached]. [But without going far to seek causes we can see from the testimony of trees more than a 100 yrs [years] old growing on flood deposits of bowlder[s] deposits that the time between such floods of capital power is more than a century & these bowlder beds have find leisure to gather trees about them & ferns & mosses & lilies & all that to these belong, such as squirrels]