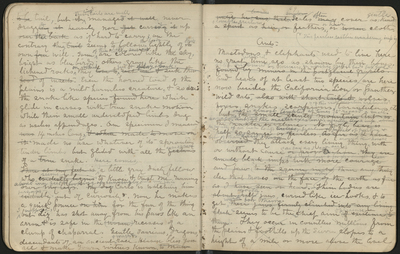 [to be] tail, but these long tails are well [it] managed[s] [it will] never dragged[ing] it heavily nor [yet] curved[ing] [it] up [over the back] as if hard to carry; on the contrary they [tail] seem[s] to follow the body lightly of their [its] own [free] will. Some of these little saurians are colored like the sky bright as bluebirds; others gray like the lichened rocks on which they feed and play and bask [love to rest on & seek their food of insects]. Even the horned toad of the plains is a mild harmless creature & so are the snake like species [found here] which glide in curves with true snake motion while their small undeveloped limbs drag as useless appendages. One specimen I measured [was] 14 inches long [& when made to move on it] made no use whatever of its sprouting tender limbs but glided with all the ease and grace [gestures] of a [true] snake.

[There at my feet is] Here comes a little gray dusty fellow who seems [evidently begins] to know & trust me, running about my feet and looking up cunningly into my face [over my legs. My dog] Carlo is watching him perhaps [evidently] out of curiosity. Now he makes a quick pounce [on him] for the fun of the thing I suppose, but Liz has shot away from his paws like an arrow & is safe in the [woven] recesses of a clump of chaparral. Gentle saurians, dragons, descendants of an ancient and mighty race. Heaven bless you all & make your virtues known. [to man]

[until he sees[learns] that [snaky]] scales often [may] cover as gentle [kind] & lovable creatures a [spirit] as [hair, or] feathers, or hair or [woven] cloth.

Mastodons & elephants used to live here no great geological time ago as shown by their bones often discovered by miners in washing gravel beds for gold. [found by miners in the postglacial gravels.] And bears of at least two species are here now besides the California Lion or panther, wild cats, [also with short tails &] wolves foxes snakes scorpions tarantulas etc but one is almost tempted at times to regard a small savage black ant about a fourth of an inch long as the master existence a restless [black] imp [tireless, fearless and] fonder of fighting and biting than any beat I know [about the small scented mountain Ant is the master existence. No griz[z]ly bear is half so savage or fearless. As far as I have observed] They attack every living thing around their homes with or without cause as far as I can see [or provocation. They are small black imps [1/4 of inch long and for size and might have] [with more courage and jaw to the square inch than anything else that moves [in the [vast?] mountains] on the face of the earth as far as I have seen or heard.] Their bodies are [about half] mostly jaws, curved like ice-hooks & to get work for them [these jaws firmly clinched into any living flesh] seems to be their chief aim and pleasure [of existence to them.] [They occur in countless millions from the plains & foothills up the Sierra slopes to a height of a mile or more above the level]