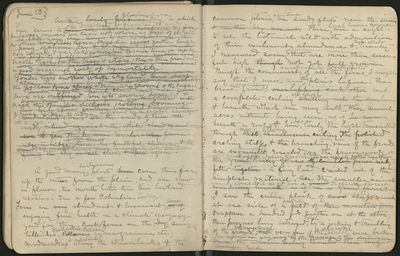 Another [lovely precious] glorious Sierra day in which one seems to be dissolved and absorbed and sent pulsing onward we know not where as part of it all. [In these boundless Sierra days life seems neither long nor short and we take no more heed to save time or make haste than do the trees and stars. This is true freedom a good practical sort of immortality.

Yonder rises another white sky land. How sharply the yellow pine spires and the palm-like crowns of the sugar pine are outlines on its snowy domes and hark the thunder billows rolling booming from ridge to ridge, followed by the faithful shower [shower] lose all separate existence as far as body goes. One seems to be adopted into the pores of the living day & to move & pulse onward as part of it all. Now life seems neither long nor short. We no more take heed to save time nor make haste than does a stream or a star. This is true freedom - a sort of immortality.

Yonder rises the pearl cloudland once more How grandly the sugar pines are outlined with their widespread feathery branches & their long pendulous cones at the ends of them all vividly relived [relined?] against the white cloud mountains

Now a few [hark how the thunder bellows, rolls and booms] thunder tones reverberating from ridge to ridge [and now comes] then the faithful shower, & the [new born] [new sky mountains fade and vanish like dreams] face of the sky is all clear & open again.]

A good many herbaceous plants [have] come thus far up the mtns [mountains] from the plain, and are now in flower, two months later than their lowland relatives. Saw a few columbines today.

Ferns are [very] abundant & luxuriant [here] [as if] enjoying fine health in a climate everyway good for them. Rock-ferns on the [dry] sunny hillsides, Cheilanthes Pellaea, gymnogramma etc.

common pteris aquinlina on sandy flats near the stream [& neither dry nor wet]. These last however common are a sight to set the botanist wild with admiration of their exuberant abundance & tough, sturdy beauty. I measured some not yet full grown that are more than seven feet high [though]

Though the commonest and most widely distributed of all the ferns, I might say that I never saw this pteris before. The broad overlapping fronds [overlapping each other] make a complete ceiling 6 feet high [shutting out the sunbeams] [&] beneath which one may walk over several acres without being seen, as if he were beneath a roof; & how soft and lovely the light transmitted through this [that] translucent ceiling. The [polished] arching stalks, & the branching ribs and veins of the fronds are charmingly [exquisitely] revealed as the framework of countless panes of pale green and yellow plant glass nicely fitted together [the green living glass of countless panes, nicely fitted together] - a fairy land created out of the simplest material. [All] The smaller animals wander about in it as if in a [grand] tropical forest [wandering beneath as if in a grand forest] I saw the entire flock of [2000] sheep vanish at one side of a patch [field of these mountain ferns] & reappear a hundred yds [yards] further on at the other, their progress being betrayed only by a jerking & trembling of the fronds and strange to say [but] very few of the stout woody stalks were broken [down, the animals having threaded their way] or injured in any way by the passage of the [destroying] devouring horde.