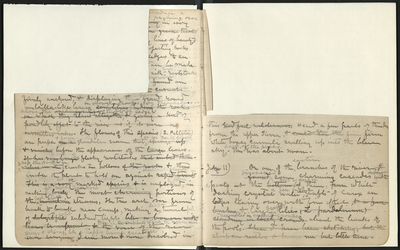 firmly anchored & displaying their broad [grand] round umbrella-like leaves in showy groups by themselves or above the [arching sedge] tufts and sedge [sometimes hiding the rocks on which they stand altogether, & giving a kind of pondlily effect to the river as if it were a currentless lake]. The flowers of this species (S. Peltata) are purple and form a tall [on a] glandular raceme that is in full bloom [springs up & vanishes] before the appearance of the [large] leaves.

This is a very] a marked species [& is] employed by Nature in making yet more beautiful [lovely] the most interesting [charming] portions of these cool clear [mountain] streams. The trees arch over from bank to bank near camp making a leafy tunnel full of soft [delightful] subdued light through [the midst of] which the river [ever] sings and shines like a happy living creature. [like a bower with leaves translucent & the voice of the river ever singing. I am more & more dissolved in]

[this Godful wilderness.] Heard a few peals of thunder from the upper Sierra, & saw [could see the] fine firm white bossy cumuli swelling up into the blue sky back of the pines. This was about noon.

June 11) On one of the eastern branches of the river [I found] discovered some charming cascades [today] with a pool[s] at the foot of each of [bottom of] them: [pure] white dashing [crystal] water, a few bushes and tufts of carex on ledges leaning over with fine effect [& a few bushes] & large orange lilies [(L. pardalinum) standing in lovely crowds] assembled in support groups about the banks of the pools. [These I have been sketching, but the sheep are restless & leave me but little time.]