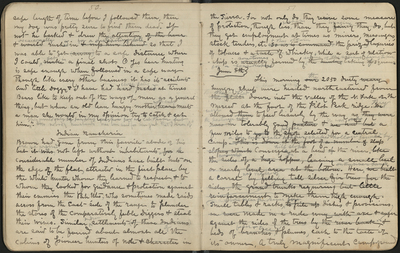 safe length of time before I followed them, then my dog was pretty sure to find them dead. If not he barked & drew the attention [of the bear & occasionally [would] rushed in for a distracting bite [& nip him behind] so that I was able to get [away] to a safe distance where I could get in [make] a final shot. O yes bear hunting is safe enough when followed in a safe way Thought like every other business it has its accidents and little Doggy & I have had closes calls [hard pushes] at times Bears like to keep out of the ways of men as a general thing, but when an old lean hungry mother with cubs [bear] meets a man she would in my opinion try to catch & eat him. This would only be fair play anyhow for we eat them but [No] nobody hereabout has been used for bear grub that I know of".

Brown had gone from this favorite abode of his ere we arrived but it is [was] not left without inhabitants [for]. A considerable number of Indians have built huts on the edge of the flat attracted in the first place by the white hunter whom they learned to respect & to whom they looked for guidance & protection against their enemies the Pah Utes [Piutes] who sometimes made raids across from the East side of the range to plunder the stores of the comparatively feeble Diggers & steal their wives. Similar Indian settlements [of these Indians] are said to be found about almost all of the cabins of pioneer hunters of note [& character] in

the Sierra. For not only do they receive some measure of protection, though less perhaps than they imagine [fancy they do], but they get employment at times as miners, messengers, stock tenders, etc and thus obtain [so as to command] the prized luxuries of tobacco & [a taste of] whisky. While a sort of relationship is sometimes [usually] formed by [some?] of the squaws being taken for housekeepers. [the hunters taking of squaws.]

This morning the [our] 2050 dusty [weary] hungry sheep were headed [sic] northeastward from the Flat [the flat] down into the valley of the N. Fork of the Merced at the foot of the Pilot Peak ridge. They [We] were allowed [them] to feed leisurely by the way as [they were now in] the pasturage was tolerably good [pasture] & it was only [we had but] a few miles to [go to] the place [spot] selected for a central camp a big corrugated hopper-shaped hollow formed by [. This is down at the foot of a number of steep slopes which] converging[e] slopes at a bend on the river [like the [corrugated] sides of a huge hopper, leaving a small level or nearly level area at the bottom] . Here [on the river bank] [we built] a corral was made and [by felling tall silver fir trees for the sides, the grand trunks requiring but little reinforcement to make them high enough].

Small tables & racks in a grove near the river for [to pile up] dishes & provisions on were made in a rude way with axe & auger against the sides of the trees by the river bank] & beds of fern and tree [branches &] plumes, each to the taste of its owner. A truly magnificent camp-ground