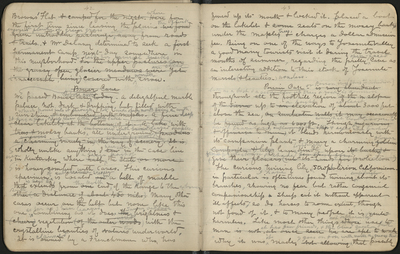 Browns' Flat [& camped for the night. Here] where for the first time since leaving the plains the flock enjoyed plenty of green grass [we found green untrodden pasturage away from roads & trails] & Mr. Delaney determined to seek a [first Permanent] camp next day somewhere in this neighborhood to last for several weeks. [For the upper pastures on the grassy open glacier meadows were [are still] yet inaccessible, being covered with [winter]snow.]

Before noon we passed Bower Cave [today]. A delightful marble palace not dark & dripping but filled with sunshine which pours into it through its wide open mouth facing the south. It has a fine deep clear little [little] lake [& embowered with maples. A fine clear lakelet at the bottom of it. A lake] with [trees &] mossy banks embowered with broad leaved Maples all underground [produces a [curious] charming variety in the way of [is something novel in] scenery. It is] wholly unlike anything I have seen [saw] in the cave-line even in Kentucky where a larger part [half] the state [or more] is honeycombed with caves. This curious specimen of subterranean scenery is located in [on] a belt of marble that is said to extend[s] from the North [one] end of the Range to the extreme South other a distance of about [450] 400 miles.] Many other caves occur on the belt but none like this one as far as I have learned combining as it does sunny outdoor [the] brightness & [cheery] vegetation [of the outer woods] [world] with the crystalline beauties of the [Natures] underworld.

It is claimed [owned] by a Frenchman who has

fenced up its mouth & locked it. Placed a boat on the lakelet & [some] seats on the mossy bank[s]

under the maple[s] trees & charges a dollar admission fee. Being on one of the ways to Yosemite Valley

a good many tourists visit it during the travel months of summer regarding the pretty open-faced cave as an interesting addition to their stock of Yosemite wonders [marvels & beauties].

Poison Oak or Poison Ivy (rhus toxicodendron) [is very abundant] both as a bush and a scrambler up trees and rocks, is common throughout all the foothill region [of the W. slope of the Sierra] up to a height [an elevation] of at least [about] 3000 feet above the sea, [on sunbeaten walls it may occasionally be found as high as 6000 ft.] Though somewhat troublesome to most travelers, inflaming the skin and eyes when touched [injurious & offensive to man] it blends harmoniously with its companion plants & many a charming flower [golden compositae & lily] leans confidingly [kindly] upon it[s bushes & give their flowers into its hands for protection.] for protection and shade [for their flowers] The curious twining lily, (Stropholirion Californicum) in particular I have [is] oftentimes found twining [confidingly]about its branches showing no fear but rather congenial companionship. Sheep eat it without apparent ill effects, so do horses to some extent though not fond of it & to many people it is [quite] harmless, [.] Like most other things not apparently [whose] useful to man, it has few friends, and the blind question [is not at once seen we are apt to wonder “why it was it made?” goes on and one with never a guess that [Not allowing] that possibly