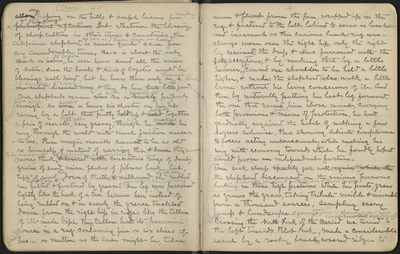 allowing piping on the hills & ample leisure for reading and thinking [philosophical reflection]. But whatever the blessings of sheep culture in other times & countries the California shepherd as far as I have seen or heard is never quite sane for any considerable time. Ba-a is about the only speech or lecture or lesson he ever hears amid all the voices of Nature. Even the howls & Ki-i's of coyotes would be blessings well heard, but he hears them only through [in] a blur of mutton wool [one sided diseased way] & they do him no [but little] good.

Transpose ahead ((Our shepherd's name is Billy [was] Ba or nearly so [Bawsle[y]] properly enough. He wears [wore] a heavy six shooter on his hip swung by a belt that partly holds [held] up & holds [held] together a pair of overalls, that are very greasy, but [though] he makes [made] his way through the world with much friction nevertheless. These magic overalls seem[ed] to be as old as himself & instead of wearing thin [& bare] they seem to be wearing (wore) thick but gradually accumulating [& covered with] concentric layers [rings] of dust, grains of sand, mica, flakes of fibrous bark, lint, tufts of wool, the down of thistles [&] milkweed etc which are rubbed in and rubbed on and felted & fastened by grease & gum making them everlasting. One leg is [was] furrowed lightly like the bark of a tree because here instead of being rubbed on & in evenly the grease trickles[d] down from the right hip in ridges like the tallow of ill-made dips. This tallow had its perennial [perennial] source in a rag containing five or six slices of fried bacon or mutton as the case might be, taken

warm [& fluent] from the pan, wrapped (up) in the rag, & fastened to the belt behind to serve as luncheon. And inasmuch as this curious lunch-rag is [was] always worn over the right hip, only the right leg receives[d] the drip & is [was] furrowed with the fatty accretions; & by making that leg a little heavier, it caused one shoulder to be held a little higher, & makes [made] the shepherd [also] walk a little lame without his being conscious of it. And then by naturally putting his best leg forward, the one that raised him above want, carrying both provisions & pistol and means of protection, he had gradually acquired the habit of walking a few degrees sidewise, thus showing delicate compliance to forces acting unconsciously while making his way with economy towards what he fondly hoped [might] would prove [an] independent fortune.

Our [The] sick sheep [speedily] got well [again] [&] [while the] the shepherd discoursed on the various poisons lurking in these high pastures while his pants already plastered with grease and pine resin grew stronger as grows the grass, taking tribute visible & invisible from a thousand sources, sampling every camp & landscape and gaining even [or] geological characters more and more comprehensive and significant.

After crossing the North Fork of the Merced we turned to the left towards Pilot Peak, made a considerable ascent by a rocky brush covered ridge to