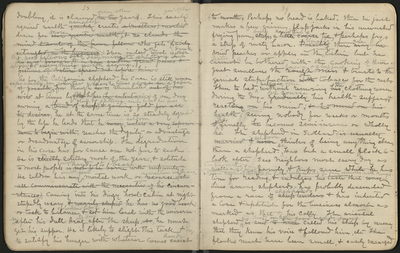 doubling, it is claimed, every other [in two] year[s]. This quickly (easily) aquired [acquired] wealth usually [quickly] creates [a (restless) morbid] desire for more [ever greater wealth (& so clouds the mind & soul of the poor fellow who gets fairly entangled in the business]. Then indeed the wool is drawn over the poor fellow’s eyes, dimming or shutting out almost everything worth seeing. his eyes forever, & in vain are the grand poems & pictures of Nature spread out before him.]

As for the California shepherd his case is still worse especially in winter when he live alone in a cabin [if possible.] For though [he is] stimulated [out of his wits] at times by [the] hopes [he entertains] of one day owning a flock and getting rich like his boss [(band of sheep) & gaining gold for all his desires], he at the same time is so steadily degraded by the life he leads that he seldom [never, unless a very superior man to begin with,] reaches the dignity or advantage or disadvantage of ownership. The degradation in his case has for cause one not far to seek. He is strictly solitary most of the year & solitude to most people seems hard to bear [is not to be borne with impunity]. He seldom has much good [any] mental work or recreation in the way [resource (at all commensurate with the necessities of his circumstances)] coming into his dingy hovel-cabin at night stupidly weary [& wearily stupid] [ he has] no good books [or task] to balance and level his life [& set him level] with the universe No after [ his dull drag] all day after the sheep [No], he must get his supper. He is likely to slight this task & try to satisfy his hunger with whatever comes handy [easiest]

[to mouth]. Perhaps no bread is baked. Then he just makes a few grimy flapjacks in his unwashed frying pan, boils a handful of tea [steeps a little coarse tea], & perhaps fries a strip of rusty bacon. Usually, [Possibly] there are [may be] dried peaches or apples in the winter cabin but he hates to [cannot] be bothered with the cooking of them. Just swallow the bacon and flapjacks [rough mess] & trust to the genial stupefaction of [with] tobacco for the rest. Then to bed [he goes] often without removing the [his] clothing worn during the day. Of course [gradually] his health suffers and [,] reacts[ing] on his mind; [& his mind on his health] seeing nobody for weeks or months [&] he finally [he] becomes semi insane or wholly so. The shepherd in Scotland [is usually married & never] seldom thinks of being anything else than a shepherd. He has but small flock to look after Sees neighbors most every day as well as his family & keeps sane [while he] has time for reading in fine weather often carries a good book to the hills with which he may converse with Kings [& indulges his taste that way] Lives among shepherds has probably descended from a race of shepherds [sheep tenders] & has inherited a love & aptitude for the business almost as marked as that of his Colly. The oriental shepherd we read, [in the good old days] is said to have called his sheep by name, that they know his voice & followed him, etc The flock must have been small, & easily managed