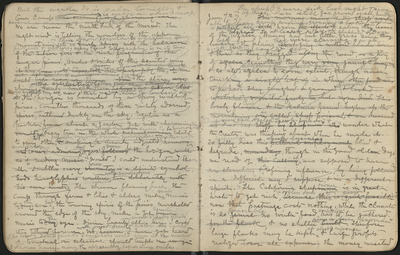 But the weather is clam tonight & Our camp is only a sheep camp [but it is charming nevertheless] [this evening is a charming one]. We are near the North Fork of the Merced. The night wind is telling the wonders of the upper mountains their snow fountains and gardens, spicy forests and groves, even their topography is in its tones. [it is fairly spicy with the balsam of the Silver Firs & the rich fragrance of the

Sugar Pines. Miles & miles of this scented way it has come, its tones tell [even] the topography too [is in its tones though we are unable to understand them.] if we could but recognize them. Now] And the stars the everlasting star lilies [of the sky how bright] new bright they are now that we have climbed above the lowland dust [are] shining [keenly bright their beams as silver lilies] [&] the horizon is bounded by a spiry wall of pines, countless thousands of these richly adorned [spires [are] outlined darkly on the sky regular as a picket fence about a garden Yet with charming variety].[Yet] Every tree [around all the horizon] seems to be harmoniously [in the whole circumference] related to every other definite symbols, divine hieroglyphs, written with sunbeams, [& making a divinely [divinely] adjusted harmony and (ones) admiring[ly] (eyes) [trace] follows the horizon wall as if reading music.] Would I could understand them [all. Doubtless every [tree] character is a definite symbol God's hieroglyphics written [with sunbeams] how deliberately with his own hand.] The stream flowing past the camp through ferns & lilies & alders makes sweet music to the [my] ear -but the towering spires of the pines marshalled around the edge of the sky make a yet finer music to my eye. Divine beauty all. Here I could stay tethered forever with just bread and water. Nor would I be lonely. Loved friends and neighbors would seem all the nearer and dearer however many the apparently separating miles. [No heaven I have yet heard of terrestrial or celestial should tempt me away.]

June 7th} The sheep were sick last night & many of them are still far from well, hardly able to leave camp, coughing, groaning and looking wretched and pitiful. [This morning many of the sheep were]

All [sick] from [the effects] of eating the leaves of the blessed Azalea. So at least say the shepherd and the Don, having had but little grass since they left [leaving] the plains, they were starving so are anything green they could get. [snatching a withered blade here & there as they dragged along the road, or a twig of azalea ceanothus they were very gaunt [starving] & hungry & so ate [anything they could get] azalea to some extent, though[they] never touching a single leaf of it when other food was to be had. They coughed & groaned [and vomited] & looked wretched, vomited freely too but none died. This lovely flower [bush] & the Kalmia found higher up the mountains are [is]called 'sheep poison', & are denounced as d-d bad stuff by sheepmen who] “Sheepmen” call Azalea “sheep poison” and wonder what the Creator was thinking about when he made it. So desperately [fully] does sheep business [this pastoral employment] blind & degrade, [nowadays], though in the good olden days we read of it [this calling] was supposed to have [an elevating &] a refining influence [by being followed in a different way I suppose & in a different spirit.] The California sheep owner [man] is in [great] haste to get rich and often does [because (this) is [easy](quite possible)] now that pasturage costs nothing, while the climate is so favorable [genial] no winter-food supply has to be gathered [for the flock], & no shelter pens or barns provided [built]. Therefore large flocks may be kept at slight expense & large profits realized [over all expense]. The money invested