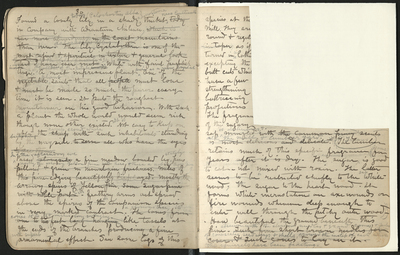 in company with Adiantum chilense [which is far more abundant in the coast mountains than here.] [calochorus Albus][The lily Cyclobothra is one of the most refined & spiritual in texture & general look [look of all the lily family][that I have ever met.] It is white with a faint purplish tinge inside at the [bottom] base of the petals [inside]. A most impressive plant pure as a snow crystal one of the [vegetable] plant saints that all [people] must love & [must] be made so much the purer every time it is seen. It puts the roughest mountaineer on his good behavior. With such a plant the whole world would seem rich though none other existed. It is not easy to keep on after the camp crows while [sheep with] such inhabitants standing beckoning by the wayside [to serve all who have the eyes to see them].

In the afternoon we passed [alongside] a fine meadow bounded by stately pines mostly the arrowy yellow pine with here and there a noble sugar pine [pillared & green in mountain freshness. Miles of this pine edging beautifully displayed. Mostly arrowy spires of Yellow Pine. Some Sugar Pine with noble port] its feathery arms outspread above the spires of the companion species in very marked contrast. A glorious tree, its cones 15 to 20 inches long swinging [The cones from one to two feet long hanging] like tassels at the ends of the branches [producing a fine] with superb ornamental effect. Saw some logs of this

turned in a lathe

sap is delicious scents all the mill and lumber yard [mingled with the common piney scents is most delicious and delicate]. [#Trans]The lumber retains much of this specific fragrance (trans) (for years [after it is dry]. The sugar [ ] [ ] [ ] is good the heartwood and] to eat - not mixed with rosin. The latter [seems to be] is restricted chiefly to the sap [whitewood]. The sugar to the heart wood. It forms white incrustation on axe wounds on fire wounds whenever deep enough to enter well through the pitchy outer wood)). How beautiful the ground beneath this Pine strewn with the slender needles and grand cones and piles of cone scales, seed wings and shells, around the instep of each where the squirrels have been feasting. [Such fine short brown needles for cover & such cones to lay on it.]