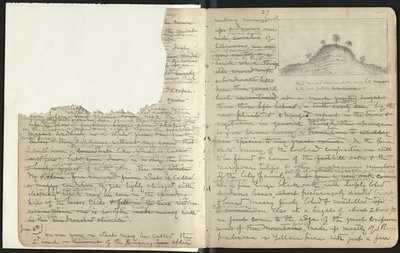 seen before [vivid flashes down] near the ground among the trees & bushed like quick throbbing fireflies in the Wisconsin meadows, rather than the so-called “wild fire.” [like the glow of fireflies, large cloud shaped masses suddenly in a white glow, one quick pulse & then darkness without any sound that I could hear. [This electric phenomenon is something] somewhat like what is called "wild fire", but is appearing] seen down in [the midst of] or over the trees & bushes [or just over them] instead of in [clouds in] the sky. The air [was] while dry & [cloudless] clear far removed from what is called a muggy condition, is yet highly charged with electricity which [as shown by] may be seen in the spreading hairs of the horses tails & felt in [and thrilled] the tense restless nervous strain one is so often made uneasy with in this dry sundrenched climate.]

We are now on what may be called the

2nd bench or plateau [summit] of the Range, [for] after

making many small ups & downs over [wide swashes] broad belts of hillwaves, [we are] with of course corresponding changes in the vegetation [now on top of a bench which though still covered with subordinate hills have their general level maintained at a much greater height than those left behind - a truth [& its abundant] [height] is marked easily seen by the new plants & a changed aspect in the trees & vegetation in general, [and by a] though the change is far from being is not a transition to wholly new species to any great extent.] In the open spots many of the lowland compositae are still to be found & some of the [foothill oaks & the] mariposa tulips & other conspicuous members of the lily family but the characteristic Blue Oak of the foothills is left below and [But here a new oak comes in. ] A fine large black oak (Quercous Californica), with deeply lobed deciduous leaves, short picturesquely divided trunk

& broad massy finely lobed & modelled head [top] [Q. sonomensis] takes its place. Here also at a height of about 2500 ft we [first] come to the edge of the great coniferous [woods of these mountains] forests made up mostly of Pinus ponderosa or Yellow Pine with just a few