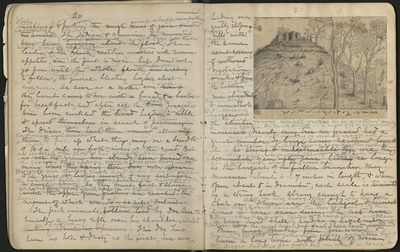 dishwashing & packing [the rough mass of gear on] [The camp stuff carefully assorted balanced] [two horses.] Billy and the Indian & chinaman [the meanwhile have been hovering about][started ahead with] [the flock.] and dogs kept them headed along the road. The leaders [of the flock] restless creatures with ravenous appetites were [are] the first to move but dare not go far from [until] the main body [whole flock] [could be got] [are willing] to follow them. A general bleating began[ins] about sunrise. As soon as a mother ewe arose [rises] [the] her lamb came [comes] [to her with a] bounding & a bunting For its breakfast and after (all) the thousand [2000] youngsters [have] had been suckled the flock [band] began [begins] to nibble & spread [themselves] in search of pasturage. The drivers [then headed them onward] allowed [ing] [the starving wool bundles] [them] to pick up what they could find [may] on a breadth of about 1/4 of a mile [on both sides of the road]. But as several other flocks had already passed over the ground this spring, scarce a leave green or dry was left therefore out starving flock had to be hurried on over the bare hot hills to the [upper pastures the] nearest of the green pastures about twenty or thirty miles from here. [as all the ground has already been passed over many times this spring there does not appear to be grass or leaves enough of any sort for a single sheep. So they must fuss & starve until the upper green pastures are reached, the nearest of which are 30 or 40 miles distant.]

The pack animals were led [follow lead] by Don Quixote himself, a heavy rifle over his shoulder intended for bears and wolves [seeking adventures & pastures]. This day has been as hot & dusty as the first our way

& somewhat larger as the elevation increases. Nearly every tree we passed had a great number of large cones scattered beneath it so strong & indestructible they are. They accumulate year after year lasting as long as the largest of the fallen branches. They measure] (P. Sabiniana) which here forms small groves or is scattered among the Blue Oaks. The trunk divides at a height of 15 or 20 feet into more stems out-leaning or nearly upright with many loose straggling branchlets and long gray needles casting but little shade. In general appearance this tree [it] looks more like a palm than a pine. The cones are about 6 or 7 inches in length, & when open about 5 in diameter, each scale is terminated by a strong hook strong enough to hang a coat on. They are very heavy and last long after they fall so that the ground beneath the trees is covered with them. They make fine rosiny light giving camp fires, next to ears of Indian corn the most beautiful fuel I have ever used or heard of. The nuts, the Don told me [I am told] are gathered in large quantities by the Digger Indians for food. They are about as large [There are the largest & heaviest cones I have ever seen. The nuts have a very hard shell, hard as a hazelnut These burrs make fine firewood & burn a long time with plenty of rosin]