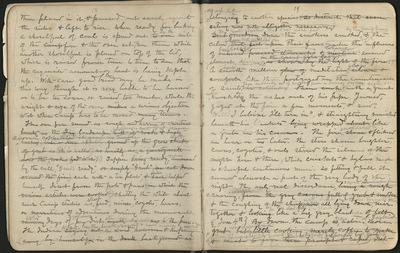 then placed in it [&] pressed out [evenly] against the sides & left to rise. When ready for baking a shovelful of coal is spread out by the [to one] side of the [camp]fire & the oven set upon them while another shovelful is placed on top of the lid which is raised from time to time to see that the requisite amount of heat is being kept up. With care good bread may be made in this way though it is (very) liable to be burned or to be too sour, or raised too much, while the weight [& size] of the oven is [makes] a serious objection [to it when camp has to be moved many times.

Thus our fare seemed as rough and barren of spiritual beauty as the dry landscape about us but to a keen Sierra appetite it gave no trouble with its rocks & dusty bushes, but a keen appetite ground up the gross stuff chunks of grub as it is called as heartily as a quartz-mill does the rocks fed to it X)). Supper [being ready,] was announced by the call, "Grub's ready" [or simply "Grub" we sat down around the fire] each with a tin plate [& spoon each] helped himself direct from the pots & pans [in which the various articles were cooked] chatting the while about such camp studies as sheep feed, mines, coyotes, bears, or [narratives of] adventures during the memorable gold [mining] days of [golden] pay dirt etc [worth 2 dollars in the pan].

As if he belonged [ing] to another species [so distinct that even eating was not altogether necessary.] The meal finished the dogs were fed [Grub grinding done] the smokers smoked tobacco by the campfire & the calm [glow] that settled on [that fell upon] their faces under the influences of fullness [outward pressed stomachs & nicotine] seemed almost divine [as shown by the light of the fire.][in the campfire light]

A deep [smooth] mellow [glow of] meditative glow [silence & Comfort] like that portrayed on the countenances of saints [in solitude]. Then suddenly as if awakened from a drowsy dream, with a sigh or [Then each] with a grunt [each] knocked[ing] the ashes out of his pipe, yawned, gazed at the fire a few moments, [&] said, "Well! I believe I'll turn in", & straightaway vanished beneath his blankets [lying wrapped about like a grub in his cocoon]. The fire smouldered [shone] & flickered an hour or two later. The stars shown brighter, coons, coyotes, & owls stirred the silence [of the night] here & there, while crickets & hylas made a cheerful continuous music so fitting & full it seemed almost a part of the very body of the night. The only [real] discordance came [perhaps] from [being a rough] a snoring sleeper [from the gray cocoons full of grub & smoke & the coughing [of the] sheep with dust in their throats. They are [now] all lying down now near [together & looking] In the starlight the flock looks like a big gray blanket [of felt.]

{June 4th} [By dawn,] The camp was [is] astir at daybreak. More grub,[was prepared with] [but little cooking merely coffee to make & meat to fry. Then prompt & rapid] Coffee, bacon and beans formed the breakfast followed by quick dish-