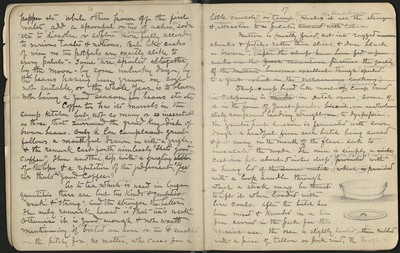 pepper etc. While others pour off the first water, add a spoonful or two of ashes or soda [etc] to dissolve or soften the skins more fully according to various tastes & notions. But like casks of wine no two potfulls are exactly alike to every palate. Some are supposed to be spoiled [altogether] by the moon, by some unlucky day, by the beans having been grown on soil not suitable, or the whole year is to blame as not [being] a favorable one [good season] for good beans etc etc

Coffee too has its marvels in the camp kitchen but not so many or so inscrutable as those that beset [surround] the grand King dish of brown beans. [Only] A low complacent grunt follows a mouthful drawn in with a gurgle, & the remark cast forth aimlessly "That's good coffee". Then another gurgling sip [with a gurgling [sound] slobber of the lips] & [a] repetition of the judgment, "Yes sir that is good Coffee."

As to tea also [which is] used in larger quantities there are but two kinds [& qualities] "weak" and "strong", [and] the stronger the better The only remark heard is "That tea's weak" Otherwise it is good enough & not worth mentioning. If it has been boiled an hour or two or [&] smoked on the pitchy fire, no matter, who cares for a

little creosote or tannin, they make[s] the black beverage [it] all the stronger & more attractive to [a] tobacco tanned palates [tanned with tobacco].

Mutton is (mostly fried), cut into ragged [uneven] chunks & patches rather than slices, & done black or brown in the frying pan. [After the sheep have been fed a few weeks on the fresh mountain pastures the quality of the mutton becomes excellent though of course it is] spoiled to a great extent by the villainous cooking.]

Sheep-camp bread like most California [of] camp bread [in California] is baked [made] in Dutch ovens, some of it in the form of Yeast powder biscuit - an unwholesome sticky compound leading straight [on] to dyspepsia. The greater part however is fermented with sour dough. A handful from each batch being saved & put away in the mouth of the flour sack to inoculate the next. The oven is simply a [wide] cast iron pot about 5 inches deep & from 12 to 18 inches wide [provided] with a heavy lid [of the same metal which is] provided [Sketch of Dutch Oven] with a loop handle through which a stick may be thrust to lift it when covered [loaded] with live coals. After the batch has been mixed & kneaded in a tin pan [carried in the pack for this special use], the oven is slightly heated, and [then] rubbed with a piece of tallow or pork rind, the dough is