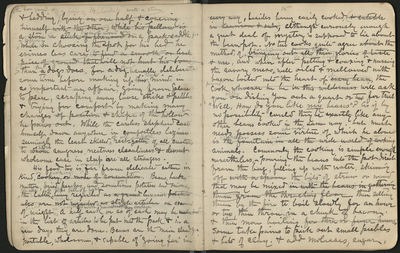 Is the bare ground and bedding is a pair of blankets with a stone [lying on one half & covering himself with the other, while his pillow is a stone] a [stick of firewood] piece of wood or a pack-saddle for a pillow [While] In choosing the spot for his bed he evinces less care [to find a smooth or level piece of ground that will not hurt his bones] than the [a] dogs [does], for they [a dog] usually deliberate some time before making up their [his] minds in so important an affair going from place to place, scraping away loose sticks & pebbles & trying for comfort by making many changes [of position & shape of the hollow he paws out.] While the careless shepherd casts himself down anywhere in the comfortless laziness seemingly the least skilled of all seekers [rest-getter of all creatures] To him [whom] snugness neatness [cleanliness & devout] wholesome ease in sheep are [all] strangers.

His food too is usually far from delicate either in kind, or cooking [cookery, or mode of consumption]. Beans, bacon, mutton, dried peaches and sometimes potatoes and onions, make up this bill of fare the 2 articles [latter] being regarded as [a grand] luxury. [Potatoes also are not regarded as stable articles] on account of their weight as compared with the nourishment they contain. A half sack or so of each may be [included in the list of articles to be] put into the pack & in a few days they are done. Beans are the main [standby] portable, wholesome, & capable of "going far" in

[every way], besides being easily cooked [& eatable in season & out], although curiously enough a great deal of mystery is supposed to lie about the bean pot. No two cooks quite agree on [about] the methods of making beans their best [bringing out all their glories of taste & use,] [developing] [cooking them] and when after petting & coaxing & nursing the savory mess, well oiled & mellowed with bacon boiled into the heart of it [every bean,] the proud cook [whoever he be in this wilderness] will ask you after [on] dishing you out a quart of two for trial "Well, how do you like my beans"? As if by no possibility could they be [exactly] like any other beans cooked in the same way, but must needs possess some special virtue of which he alone is master [the fountain in all the wide world of cooking animals]. Commonly the cooking is simple enough nevertheless, - pouring the beans into the pot direct from the bag, filling up with water, skimming off [with a spoon] the bits of straw or wood that may be mixed with them [in with the beans in gathering them from the thrashing floor], then setting then by the fire to boil slowly for an hour or two, then throwing in a chunk of bacon & then more boiling [for three or four hours]. Some take pains to pick out small pebbles & bits of clay & add molasses, sugar,