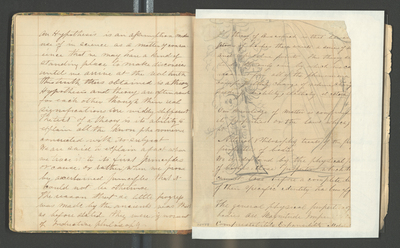 An hypothesis is an afsumption [assumption] made use of in science as a matter of convenience that we may have a kind of standing place to make discoveries until we arrive at the real truth. This truth thus obtained is a theory hypothesis and theory are often used for each other though their real significations are widely different. The test of a theory is its ability to explain all the [known] phenomena constricted with its subject. We are said to explain a fact when we trace into its first principles or cause, or rather when we prove by ascertained principles that it could not be otherwise.

The theory of [Buscovich] is that [between] atoms of bodies there exists a series of a [ ] and [repulsive] points. This theory [ ] to be the only one by which [we] [can] account for all of the phenomena comprefsibility [compressibility] change of volume, [change] hardnefs [hardness] [ductility] [elasticity] et cetera.

Our knowledge of matter is confined its properties or the laws [which] [ ] it.

Natural philosophy treats of the [ ] properties of bodies.

We understand by the physical [ ] of bodies, those properties which [ ] cannot lose before a complete [ ] of their specific identity has been [ ]. The general physical properties of bodies are magnitude [impenetrability] compressibility expansibility [mobility].