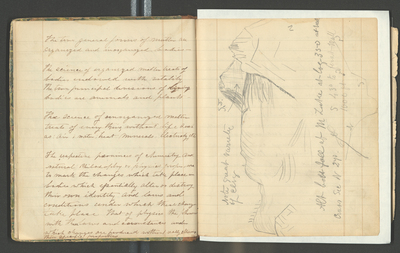 The two general forms of matter are organized and inorganized [unorganized] bodies.

The science of organized matter [treats] of bodies endowed with vitality. The two principal divisions of [living] bodies are animals and plants.

The science of unorganized matter [treats] of everything without life such as; air; water; heat minerals; electricity; etc.

The respective provinces of chemistry and natural Philosophy or physics proper, are to mark the changes which take place in bodies which [pentially] [exponentially] alter or destroy their own identity and laws and conditions under which these changes take place That of physics the [phenomenon] with their laws and [circumstances] under which changes are produced without really altering their specific properties.