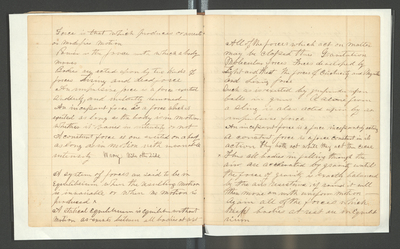 Force is that which produces or arrests or modifies motion.

Power is the force with which a body moves.

Bodies are acted upon by two kinds of forces living and dead force. An impulsive force is a force exerted suddenly, and instantly removed. An incefsant [incessant] force is a force which is exerted as long as the body is in motion whether it varies in intensity or not. A constant force is one exerted on a body as long as in motion with invariable intensity. Wrong [side] other side.

A system of forces are said to be in equilibrium when the [resulting] motion is invariable or when no motion is produced x.

A statical equilibrium is [equilibrium] without motion as exists between all bodies at rest.

All of the forces which act on matter may be clofsed [clossed] thus. Gravitation Molecular forces. Forces developed by light and [heat]. The forces of electricity and [magnetion] and living force.

Such as is exerted by gunpowder upon balls in guns. A stone from a sling is also acted upon by an impulsive force.

An incefsent [incessant] force is a force incefsantly [incessantly] acting. A constant force is a force constant in its action. They both act while they act them cease. Thus all bodies in falling through the air are accelerated by gravity until the force of gravity is exactly balanced by the airs resistance, if [round] it will then move on with uniform motion. Again all of the forces which keep bodies at rest are in equilibrium