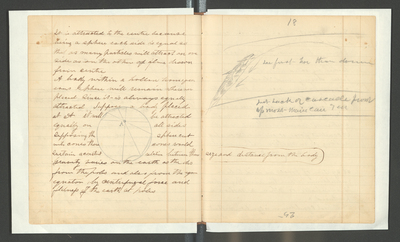 It is attracted to the centre because being a sphere each side is equal so that as many particles will attract on one side as on the other of a line drawn from centre.

A [body] within a hollow homogeneous sphere will remain wherever it is laced since it is always equally attracted. Suppose a body placed at A [sketch of sphere] it will be attracted equally on all sides supposing the sphere cut into cones those cones would sustain a constant relation between [their] size and distance from the body. Gravity varies on the earth as the dis [distance] from the poles and also from the [eq] equation by centrifugal force and [flatness] of the earth at poles.