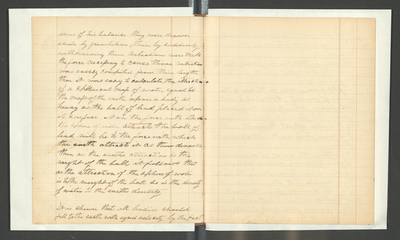 Arms of his balance they were drawn aside by gravitation, then by suddenly withdrawing then vibrations were made the force necefsary [necessary] to cause those vibrations was [easily] computed from their length. Then it was easy to calculate the attraction of a spherical mafs [mass] of water equal to the mass of the earth whom a body as heavy as the ball of lead placed upon its surface. Now the force with which the sphere of water attracts the ball of lead will be to the force with which the earth attracts it as [their] [densities] then as the earths attraction is the weight of the ball it follows that as the attraction of the sphere of water is to the weight of the ball so is the density of water to the earths density.