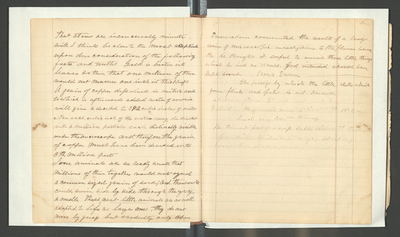 That atoms are inconceivably minute will I think be clear to the most sceptical [skeptical] upon due consideration of the following facts and truths Gold is beaten into leaves so thin that one million of them would not measure one inch in thicknefs [thickness]. A grain of copper difsolved [dissolved] in nitric acid to which is afterwards added water of amonia [ammonia] will give a decided to 392 cubic inches of water Now each cubic inch of the water may be divided into a million particles each distinctly visible under the microscope and therefore the grain of copper must have been divided into 392 million parts.

Some animals are so really small that millions of them together would not equal a common sized grain of sand; and thousands could swim side by side through the eye of a needle. These neat little animals are as well adapted to life as larger ones, they do not move by guefs [guess] but evidently only [upon]

[Swammerdam] committed the results of a long series of microscopic investigations to the [flames] because [the] he thought it sinful to unveil those little things which he had no doubt God intended should be kept secret. [Prous] Swam.

The procefs [process] by which the little shells which form flints and opals is not known.