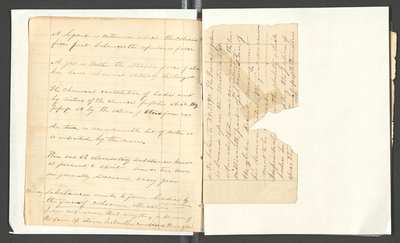 A liquid is matter in which the cohesive force just balances the repulsive force.

A gas is matter the attractive force of which has been almost entirely destroyed.

An atom is an indivisible bit of matter as is indicated by the name.

There are 62 elementary substances known at present to exist. One or two more are generally discovered every year.

Elementary substances [unite] to form bodies by the force of cohesive attraction and repulsion. I am not aware that anything is known of the form of atoms. I. Newton considered them as [spherical]

A 36 [bears] to 39.1393. The French system is based upon the metre which when adopted was considered the ten-millioneth part of the quadrant of x a meridian of the globe. Recent measurement has demonstrated the first measurement to be [correct.

Impenetrable [ ] is the ability which bodies [ ] [ ] the portion of space the [ ] [time] pofsefs [possess] to themselves.