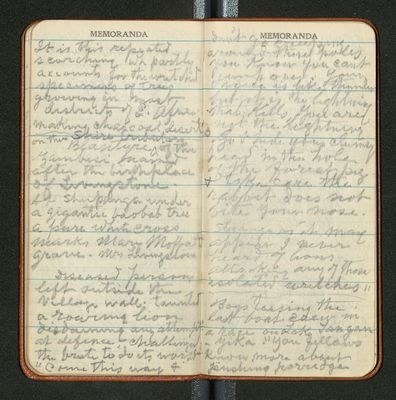 on the Balantyre Shire tributary of the Zambesi named after the birthplace of Livingstone. At Shupanga under a gigantic baobab tree a pure white cross marks Mary Moffat grave. Mrs Livingstone

Diseased persons left outside the Valley wall, taunted a roaring lion disdaining any attempt at defense challenged the brute to do its worst “Come this way &

don’t go creeping around these [pokes] you know you can’t jump over. Your voice is like thunder but it is the lightning that kills. You are not the lightning. Go & hide your clumsy head in the hole of the forest pig & take care the rabbit does not bite your nose.

Strange as it may appear I never heard of lions attacking any of those isolated wretches.

Boys teasing the last boat crew in a race on Lake Tanganyika. “You fellows know more about pushing porridge