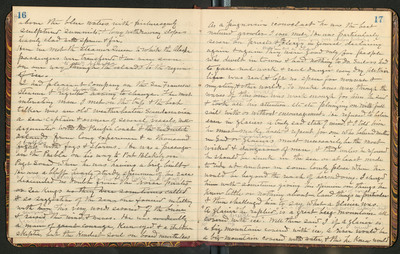 Here we met the steamer Queen to which the Alaska passengers were transferred. & [we] were soon on our way to icy Alaska [through the islands to the regions of ice].

I had pleasant company on the San Fransisco steamer & left it with regret[ted having to change]. The most interesting man I met on the trip & the best talking was an old weather-beaten Scandanavian, a sea captain & owner of several small vessels, well acquainted with the Pacific Coast & other coasts [and the Sandwitch [Sandwich] Islands] from long experience & a thousand battles [fights] with fogs & storms. He was a passenger on the Puebla on his way to Port Blakely on Puget Sound where he was having a brig built. He was a bluff hearty sturdy specimen of his race, a worthy descendent of the old Norse Sea Kings, descended no doubt from the Norse Pirates [or] Sea Kings [as they were sometimes called] & so suggestion of the sea one fancied in talking with him. His very words savored of the brine & seemed to raise[d] the winds & waves. He was [evidently] a fearless man of [great courage], keen-eyes & a stubborn skeptic, but the kindest soul on board nevertheless

As a pugnacious iconoclast he was the best natured growler I ever met. He was particularly severe on priests [& the clergy] from being poor sailors perhaps in general, declaring again & again that as a class they were good only for people who dwelt in towns & had nothing to do. Sailors had to face real work & real danger every day, all their life[s] was real & left no space for nonsense & mystery & other worlds. To make ones way through the waves of this world [one] was work enough for him he said & required [took] all his attention. Etc etc. plunging on [with] full sail with or without encouragement. He refused to believe even in glaciers. A truly sad state of mind & I told him he must make haste & repent for one who believed neither in [God] ministers or glaciers must necessarily be the most wicked & unfortunate [dangerous] of men & that unless he reformed he should be sunk in the sea or at least made to ride at anchor in some lovely place where he would be beyond the reach of harmdoing. I charged him with sometimes giving his opinion on things he knew little or nothing about – land things of course [in particular] & then challenged him to say what a glacier was. “A glacier” he replied in a bluff tone with words drawn out like a breeze, “is a great big mountain all covered up with ice.” Well then, said I, if a glacier is a big mountain covered with ice, a river must [would] be a big mountain covered with water, & this he knew would