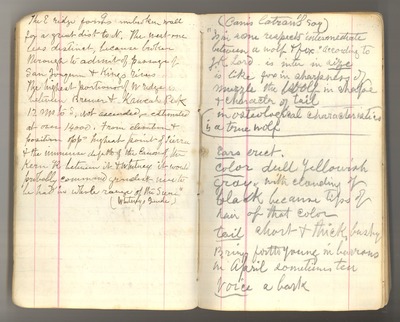 9 The E [East] ridge forms unbroken wall for a great dist [distance] to N [North]. The west one less distinct, because broken through to admit of passage of San Joaquin & Kings Rivers The highest portions of W [west] ridge is between Brewer & Kaweah Peak 12 ms [miles] to S [South], not ascended, estimated al [altitude] over 14000, from elevation & position opp [opposite] highest point of Sierra & the immense depth of the Canon of the Kern R [River] between it & Whitney it would probably command grandest view to be had in whole range of the Sierra” (Whitney [ ])

10 (Canis latrans [ ]) “Is in some respects intermediate between a wolf & fox” according to J.K. Lord is inter [intermediate] in size is like fox in sharpness of muzzle the wolf in shape & character of tail in osteological characteristics is a true wolf ears erect. color dull yellowish gray, with [clouding] of black because tips of hair of that color tail short & thick, bushy Bring forth young in burrows in April sometimes ten voice a bark