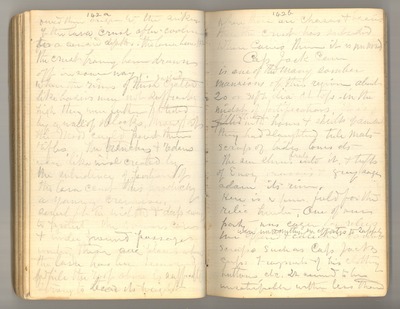 142a owed their origin to the sinking of the lava crust after cooling to a consid [considerable] depth. The lava beneath the crust having been drawn off in some way When the rims of these jagged crater like basins were not sufficiently high they were further protected by a wall of blocks through wh [which] the Mods [Modocs] could point their rifles. The breaches & redans were like wise created by the subsidence of portions of the lava crust thus producing a yawning crevasse, several ft [feet] in width & deep enough to protect the various caves & S. under ground passages uniting these are places where the lava has been removed while the roof above is sufficiently strong to bear its height

142b When there are chasms & basins there the crust has subsided When caves [there] it is [unmoved] Cap Jack Cave is one of the many somber mansions of this region about 20 or 30 ft [feet] dia [diameter] at top in the midst of fortifications. It is [filled] littered with bones & skulls of animals they had slaughtered tule mats scrap of hides bones ets [etcetera] The sun shines freely into it & tufts of Eriog [eriogonum] grasses & gray sage adorn its rim. Here is a fine field for the relic hunter. One of our party was eager for relics were unremitting in efforts to supply [we] offered & collected various scraps such as Cap Jacks cups fragments of his clothing buttons, etc. It seemed to be unsatisfiable with less than