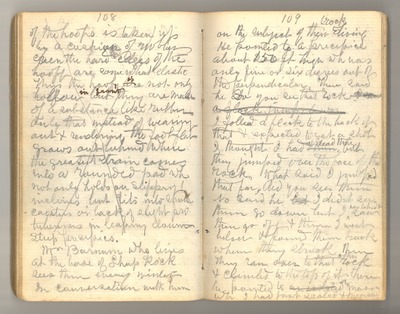 108 of the hoofs is taken up by a cushion of rubber even the hard edges of the [hoofs] are somewhat elastic Thus the hoof[s] is [are] not only hollow in front but they are made of a substance like rubber only that instead of wearing out & rendering the foot flat grows out behind where the greatest strain comes into a rounded pad wh [which] not only holds on slippery inclines but fits into small cavities or back of slight protuberances in leaping down steep precipices. Mr. Barnum who lives at the base of Sheep Rock sees them every winter. In conversation with him

109 on the subject of their rock diving He pointed to a precipice about 150 ft high wh [which] was only five or six degrees out of the perpendicular, then said he Do you see that rock [I saw a flock jump down] I [followed] a flock to the back of that & expected to get a shot. I thought I had [them] a dead [thing] but they jumped over the face of the rock. What said I jumped that far, did you see them. No said he, [but] I didn't see them go down but I was behind & saw them go off & then I went below & found their track where they struck. Then they ran over to that other rock & climbed to the top of it. There he pointed to [an isolated] a mass wh [which] I had just scaled & [measured]