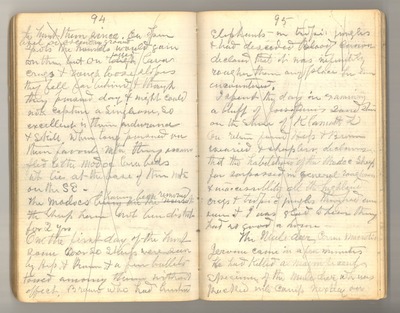 94 to hunt them since. On open level or ascending ground spots the hounds would gain on them but on [rough] jagged lava crags & rough loose slopes they fell far behind & though they pursued day & night could not capture a single one, so excellent is their endurance & skill. When long pursued on their favorite mtn [mountain] they [ ] fled to the Modoc lava beds wh [which] lie at the base of this mtn [mountain] on the SE. The Modocs having been removed [being on the reservation] the sheep have not been been [disturb] for 2 yrs On the first day of the hunt some 60 or so sheep were seen by Hep. & [Brown] & a few bullets tossed among them without effect. Brown who had hunted

95 Elephants in tropic jungles & had [descended] Bloody Canon declared that it was infinitely rougher than any place he ever encountered. I spent the day in examining a bluff of fossiliferous sandstone on the shore of Klamath L [Lake] On return found Hep & Brown wearied & sheepless, declaring that the habitations of the Modoc Sheep far surpassed in general roughness & inaccessibility all the highland crags & tropic jungles they had ever seen & I was glad to hear they had so good a [home]. The mule deer, Cervus Macrotis Jerome came in a few minutes He had killed a magnificent specimen of the mule deer wh [which] was [packed] into camp next day on