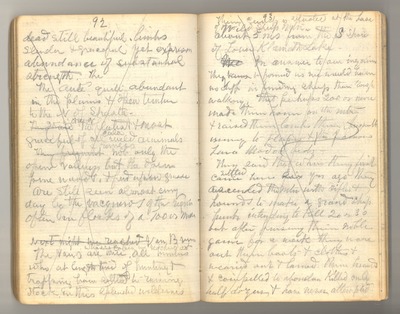 92 dead still beautiful, limbs slender & graceful yet [exprism] abundance of substantial strength. The The ante? [antelope] quite abundant in the plains & open timber to the N of Shasta [They are] one of the fleetest & most graceful of all [cala] wild animals [They frequent] & ranges not only the open valleys but the [open] pine woods, & feed upon grasses Are still seen almost every day by the vacqueros [vaqueros] of this region often in flocks of a 100 or more [Next night we reached] Van Brems whose cabin we reached [ ] The Vans are [three], all hunters who at length tired of hunting & trapping have settled to raising stock in this splendid wilderness

93 Their camp is situated at the base of Wild Sheep Mtn about 5 ms [miles] from the S shore of Lower Klamath Lake. In answer to our inquiries they [Vans] informed us we would have no [diff] in finding sheep than rough walking, that perhaps 200 or more made their home on the mtn [mountain] & raised their lambs [there], frequently [issuing] to [plains] & [the] [famous] Lava Modoc beds They said that when they first settled came here [six] yrs [years] ago they ascended the mtn [mountain] with rifles & hounds to make a grand sheep hunt, intending to kill 20 or 30 but after pursuing their noble game for a week they wore out their boots & clothes & wearied out & [lamed] their [hounds] & compelled to abandon killed only half dozen & have never attempted