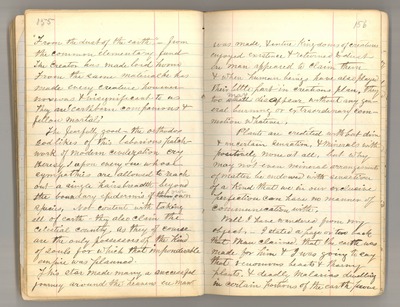 “From the dust of the earth,” from the common elementary fund the Creator has made lord homo. From the same material he has made every creature, however noxious and insignificant to us. They are “earth-born companions and fellow mortals.” The fearfully good – the orthodox Godlikes of this laborious patchworks of modern civilization cry Heresy! upon everyone whose sympathies are allowed to reach out a single hair’s breadth beyond the boundary epidermis of our own species. Not content with taking all of earth, they also claim the celestial country, as they of course are the only possessors of the kind of souls for which that imponderable empire was planned. This star made many a successful journey around the heavens ere man was made, and entire kingdoms of creatures enjoyed existence and returned to dust ere man appeared to claim them, and when human beings have also played their little part in creation’s plan, they too may disappear without any general burning or extraordinary commotion whatever. Plants are credited with but dim and uncertain sensation, and minerals with positively none at all, but why may not even mineral arrangements of matter be endowed with sensation of a kind that we in our exclusive perfection can have no manner of communication with. Well, I have wandered from my object. I stated a page or two back that man claimed that the earth was made for him, and I was going to say that venomous beasts and thorny plants, and deadly malaria dwelling in certain portions of the earth prove