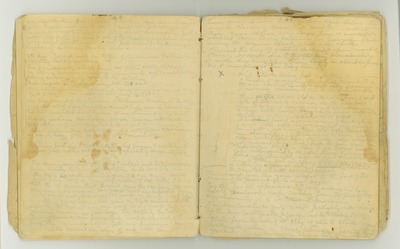 40 watching the rain drops plashing & breaking upon polished surface of the rocks near my camp. I could not but admire the wonderful strength to hear all of this direct harmonizing together with that of the big hail & all of the [corroding] fogs & dews long lying snows—for thousands of yrs [years] yet brilliant as the tranquil surface of a sunny crystal lake. 8th day—Set out early for the gls [glaciers] of the Minarets & whatsoever else they had to give me. Saw 6 woodchucks—High livers all of them. Alt [Altitude] 10700 [feet] on sloping moraine meadow – fine burly sufficient looking fellows in every way equal to the situation. Water ouzels in lake diving alt [altitude] 10600 ft. Primula Suffrutescens abundant nearly everywhere on my way up to 11000 ft. One place in flr [flower] (Aug 16 1873) On very summit of one of the passes of the Minarets standing in the [stiff] wind at alt [altitude] of 11600 found here currant bushes new in species to me. two half burnished bumblebees upon them & a fly or two. The big gentiana yet higher 10500. Saw one with corolla split down as if hail stone had fallen into it. Never before saw rocks so painted with yellow & red lichens as on the sides of the passes in the Minarets. The fine [Striea] perhaps & certainly the deep grooves & scratches of gls [glaciers] on slate rock intersect as repeatedly discovered [today]. The morning was bright & bracing. I walked fast for I feared noon rains, besides the Minarets have been [waited] for a long time. My camp is in the uppermost grove of a can [canyon] running nearly south from one of the many deep recesses of Mt. Ritter. I knew that the gl [glacial] canon [canyon] that drained away the ice from the many chambers of the Minarets ran [past] this & was separated from it by a huge wall unpassable opposite my camp but I hoped to be able to cross [higher], was soon on top & crossed without difficulty. The Minarets were now fairly in my grasp [had] been crossing [canyons] for five days, this certainly the last their appearance seen from here most impressively sublime from their immense height, yet very picturesque. Most elaborately carved on edges of any slate summits [I]

41 have seen. 4 lakes [in] [lake] open eyes, below the ample clouds of neve that send them waters. These neve slopes very large here & wonderfully adapted from form & situation for picturesque effects among the angular black slate slabs & peaks. Observed the lines of greatest declivity upon several of these. No doubt due to the slipping & avalanching of winter dry snow upon their steeply inclined surfaces as I have guessed for a long time. [sketch: deep here] Wind streaks snow but not [thus]. I thought of ascending the highest Minaret wh [which] is the one farthest South but after [2] [ ] it narrowly discovered this to be impossible. There is one small gl [glacier] on W [West] side near S [South] end wh [which] I set out to examine. On the way had to ascend or cross many neves & old moraines & huge rock bosses domish in form with wh [which] the bottom of the wide [canyon] is filled--& the [bottom] foot of a former moraine of this W [West] gl [glacier] is a small lake not a 100 yds [yards] long but very grandly framed with a sheer wall of neve 20 ft high. Next to its edge observed the fiery lamination of the snow. Beautiful caves reached back from the water’s edge some [places] snow walls overleaned huge blocks broke off from main neve with angles sharp as those of ice leaned into the lake undermined by the water these fissures finely filled with blue light. Water dripped & trickled all along the white [neve] . Sun was strong. Never saw so grand a setting for a green gl [glacial] lake. Sharp pks [peaks] of Ritter seen over the snow [shone] with splendid effect. The ascent from this rare lakelet to the foot of the moraine of the present gl [glacier] is about 100 ft. This gl [glacier] has the appearance of being cut in two by a belt of avalanche rock reaching from the foot of the cliffs above the gl [glacier] to its [terminal] moraine. This avalanche is quite recent probably sent down by the Inyo earthquake (a year ago last 26th of March 1873). Slate from the [nature] of its clvg [cleavage] is able to stand against earthquake action in much [slimmer] forms than granite. Those immense slopes due to earthquakes