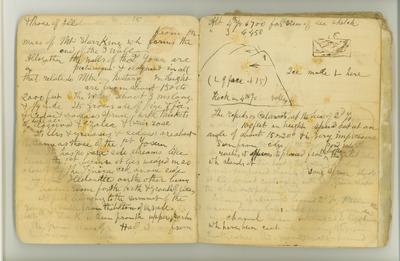 15 those of Illilouette, below this slope a bare granite [boss] comes from the mass of Mt. Starr King wh [which] forms the end of the S [south] wall. Altogether the walls of the 2d Yosem [Yosemite] are exceedingly picturesque & eloquent in all that relates to Mtn. history. In height the walls [ ] are from about 1500 to 2000 feet. The valley about 3 ms [miles] long & 1/4 wide. Its groves are of pine & fir & cedar & Douglass spruce with thickets of [ ] dogwood & azalea & brier rose. Its flrs & grasses & sedges are about the same as those of the 1st Yosem. It has no large side streams like those of the 1st because it lies wedged in so closely by the Tenaya crk [creek] on one side & by the Illilouette on the other leaving no [basin] room for the birth & growth off [streams]. No peak belonging to the summit of the range is visible from the bottom of the vall [valley ] but the cone of Star K [King] is seen from the upper portion & the grand mass of the Half Dome from the lower [ ] [ ] [ ] [ ] 16 Alt 4th [yr] 6700 for view of see sketch Alt 3 6450 [Sketch: Ice made L here] [Sketch: (L of face [if] 15) Rock in 4th Yosemite Valley] The rapids or cataracts at the head of 2d Yosemite is about 100 feet in height spread out at an angle of about 15 or 20° & is very impressive seen from the edge of the small pond into wh [which] it rushes it appears to proceed from the bottom of the great Mtn [mountain] which stands at the head of the valley. A dark forest composed mainly of Doug spruce stands at [his] its head contrasting with it calm green shade the white outspoken waters. Following up stream beyond 2nd Yo [Yosemite], the stream is seen coming half white over long rapids in a channel [broken] interrupted by huge boulders wh [which] have been cast into it during the great earthquake. The granite walls formed