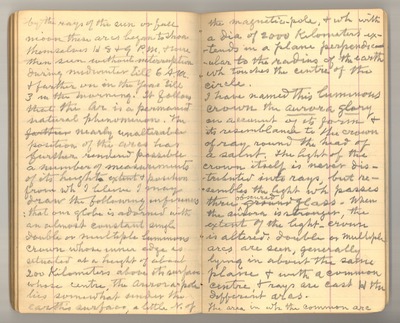 By the rays of the sun or full moon these arcs began to show themselves |o| [between] 8 & 9 P.M. & were then seen without interruption during midwinter till 6 A.M. & farther on in the year till 3 in the morning. It follows that the Ar [aurora] is a permanent natural phenomenon. The [farther] nearly unalterable position of the arcs has further rendered possible a number of measurements of its height extend & position from wh I believe I may draw the following inferences: that our globe is adorned with an almost constant single double or multiple luminous crown whose inner edge is situated at a height of about 200 kilometers above its surface whose centre, the aurora pole lies somewhat under the earth’s surface, a little N. of

the magnetic-pole & wh [which] with a dia [diameter] of 2000 kilometers extends in a plane perpendicular to the radius of the earth wh touches the centre of the circle. I have named this luminous crown the aurora glory on account of its form & its resemblance to the crown of ray round the head of a saint. The light of the crown itself is never distributed into rays, but resembles the light wh passes thru obscured [ground] glass. When the aurora is stronger, the extent of the light-crown is altered: double or multiple arcs are seen, generally lying in about the same plane & with a common centre & rays are cast |o| [between] the different arcs. The area in wh the common arc