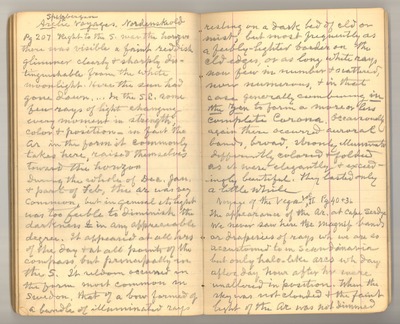 Spitzbergen [Norway] Arctic Voyages. [ Adolf Erik] Nordenskiold pg 207 Right to the S near the horizon there was visible a faint reddish glimmer clearly & sharply distinguishable from the white moonlight. Here the sun had gone down….In the S.E. some few rays of light changing every moment in strength, color & position – in fact the ar [aurora] in the form it commonly takes here, raised themselves toward the horizon. During the whole of Dec. Jan. & part of Feb, the ar was very common, but in general its light was too feeble to diminish the darkness & in any appreciable degree. It appeared at all hrs of the day & at all points of the compass, but principally in the S. It seldom occurred in the form most common in Swedon, that of a bow formed of a [bundle] of illuminated rays

Resting on a dark bed of cld [cloud] or mist, but most frequently as a feebly-lighted border on the cld edges, or as long white rays now few in number & scattered, now numerous, & in that case generally combining in the zen [zenith] to form a more or less complete corona, occasionally again there occurred auroral bands, broad, strongly illuminated differently colored & folded as it were elegantly & exceedingly beautiful. They lasted only a little while. Voyage of the Vega vol. II Pg 40 & 36 The appearance of the ar [aurora] at Cape Serdye We never saw here the magnify [magnificent] bands or draperies of rays wh we are so accustomed to in Scandinavia but only halo-like arcs wh day after day hour after hr were unaltered in position. When the sky was not clouded & the faint light of the Ar was not dimmed