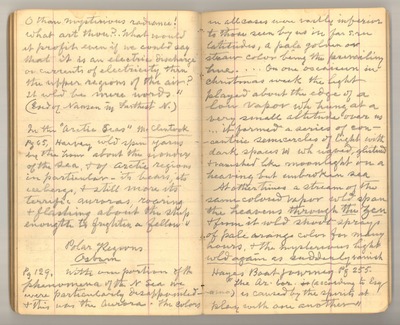 O thou mysterious radiance! What art thou? What would it profit even if we could say that it is an electric discharge or currents of electricity thru the upper regions of the air? It wld be mere words.” (End of Nanson in Farthest N [North]) In the “Arctic Seas” McClintock p. 65 Harvey wld spin yarns by the hour about the wonders of the sea, & of arctic regions in particular—its bears, its icebergs, & still more its terrific auroras, roaring & flashing about the ship enoughth [sic] to frighten a fellow” Polar Regions Osburn p. 129. With our portion of the phenomena of the N. Sea we were particularly disappointed--& this was the aurora. The colors

in all cases were vastly inferior to those seen by us in far S.rn latitudes, a pale golden or straw color being the prevailing hue….On one [occasion] in Christmas week the light played about the edge of a low vapor wh [which] hung at a very small altitude over us…it formed a series of concentric semicircles of light with dark spaces lol [between] wh waved, glistened & vanished like moonlight on a heaving but unbroken sea. At other times a stream of the same colored vapor wld span the heavens through the Zen [zenith] & from it wld shoot sprays of pale orange color for many hours & the mysterious light wld again as suddenly vanish. Hayes Boat journey p. 255. “The ar bor [aurora borealis] (according to Esquino [Eskimo] is caused by the spirits at play with one another.”