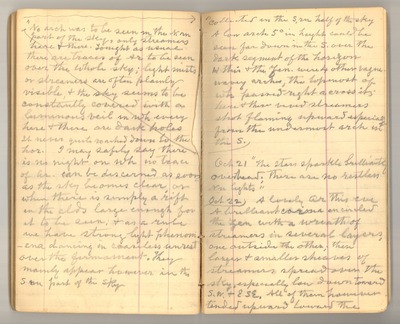 [arrow points to right page, where entry continues] collected in the S.rn [southern] half of the sky A low arch 5° in height could be seen far down in the S. [south] over the dark segment of the horizon lol [between] this & the Zen. [zenith] were 4 other vague wavey arches, the topmost of wh [which] passed right across it; here and there [ ] streamers shot flaming upward especially from the undermost arch in the S. [south]

[arrow back to left page of the journal] “No arch was to be seen in the N.rn [northern] part of the sky, only streamers here & there. Tonight as usual there are traces of Ar to be seen over the whole sky; light mists or streamers are often plainly visible, & the sky seems to be constantly covered with a luminous veil in wh [which] every here & there are dark holes It never quite reached down to the hor. [horizon] I may safely say there is no night on wh [which] no trace of Ar. [aurora] can be discerned as soon as the sky becomes clear or when there is simply a rift in the clds [clouds] large enough for it to be seen; & as a rule we have strong light phenomena dancing in ceaseless unrest over the firmament. They mainly appear however in the Srn [southern] part of the sky

Oct 21 “The stars sparkle brilliantly overhead; there are no restless Nn [northern] lights”

Oct 22 A lovely Ar [aurora] this eve A brilliant corona encircled the Zen [zenith] with a wreath of streamers in several layers, one outside the other; then larger & smaller sheaves of streamers spread over the sky, especially low down toward S.W. & ESE. [southwest & east southeast] All of them however tended upward toward the