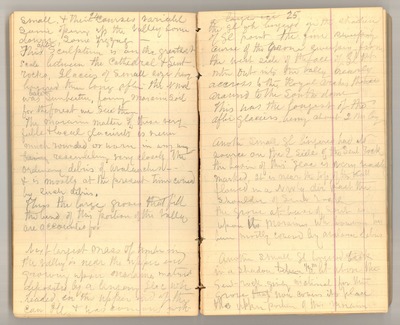 24 small, & [thin] courses variable some [opening] up the valley some down, some zigzag. This after [sculpting] is on the greatest scale between the Cathedral & Sent [Sentinel] rocks. Glaciers of small size [having] lingered there long after the N [north] wall was bare & sunbeaten, [forming] moraine soil for the forest we see there. The moraine matter of these very feeble & local glacierets is never much rounded or worn in any way [being] resembling very closely the ordinary debris of avalanches, & is mostly at the present time covered by such debris. Thus the large groves that fill the [bend] of this portion of the valley are accounted for. Next largest mass of timber in the valley is near the upper end growing upon moraine material deposited by a [lingering] glac [glacier] wh [which] headed in the upper end of the Can Ill [Cañon Illilouette] & has [commons] with 25 [a large ice] the gl [glacier] wh [which] lingered in the shadow of Gl [Glacier] point The fine [sweeping] curve of the grove sweeping from the west side of the face of Gl Pt Mtn [Glacier Point Mountain] out into the valley nearly across to the Royal Arches [thence] around to the South dome. This was the longest of the after glaciers, being about 2 mi [miles] long. Another small gl [glacier] lingered had its source on the E [east] side of the Sent [Sentinel] Rock The basin of this glac [glacier] is very [badly] marked. It is near the top of the [wall] flowed in a NWly [northwesterly] dir [direction] past the shoulder of Sent [Sentinel] Rock The grove at base of Sent [Sentinel] is upon its moraine wh [which] [however] [has] [been] mostly covered by avalanche debris. Another small gl [glacier] lingered [back] in a shadow [below] ½ m [mile] a [bit] above the Sent-Rock [Sentinel Rock] [giving] material for the grove that now covers its place The upper portion of this moraine