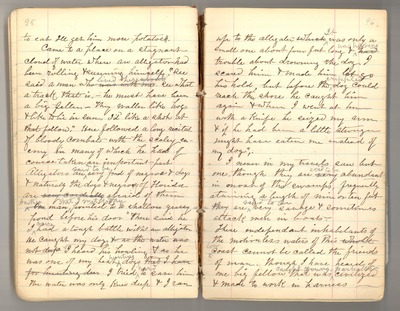 to eat. I’ll get him more potato.” Came to a place on the stagnant cloud of water where an alligator had been rolling and sunning himself. “See,” said a man who lived here. “See what a track that is, -- he must have been a big feller. They waller like hogs and like to lie in the sun. I’d like a shot at that fellow.” Here followed a long recital of bloody combats with the scaly enemy in many of which he had of course taken an important part. Alligators are said to be very fond of negroes and dogs, and naturally the dogs and negroes of Florida are afraid of them. Another man that I met to-day pointed to a shallow grassy pond before his door. “There,” said he, “I once had a tough battle with an alligator. He caught my dog. I heard him howling and as he was one of my best hunting dogs I tried hard to save him. The water was only knee deep, and I ran up to the alligator. It was only a small one about four feet long and was having trouble about drowning the dog. I scared him and made him let go his hold, but before the crippled dog could reach the shore he caught him again, and when I went at him with a knife he seized my arm and if he had been a little stronger might have eaten me instead of my dog.” I never in my travels saw but one, though they are said to be abundant in most of the swamps, frequently attaining a length of nine or ten feet, are said to be very savage and sometimes attach men in boats. These independent inhabitants of the motionless waters of this low coast cannot be called the friends of man, though I have heard of one big fellow that was caught young, partially civilized, and made to work in harness.