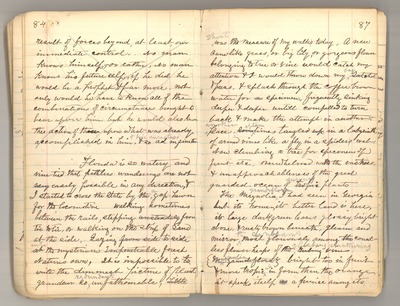 result of forces beyond, at least, our immediate control. No man knows himself, or rather, no man knows his future self. If he did he would be a prophet, and far more. Not only would he have to know all the combinations of circumstances brought to bear upon him, but he would also know the action of these upon what was already accomplished in him and his ancestors, and so ad infinitum. Florida is so watery and vine-tied that pathless wanderings are not easily possible in any direction, and I started to cross the state by a gap hewn for the locomotive, walking sometimes between the rails, stepping from tie to tie, or walking on the strip of sand at the side, gazing into the mysterious forest, Nature’s own. It is impossible to write the dimmest picture of plant grandeur, so redundant, unfathomable. Short one was the measure of my walk to-day. A new cane-line gross, or big lily, or gorgeous flower belonging to tree or vine would catch my attention and I would throw down my bag and press and splash through the coffee-brown for specimens, frequently sinking deeper and deeper until compelled to turn back and make the attempt in another and another place, oftentimes tangled in a labyrinth of armed vines like a fly in a spider web, now climbing a tree for specimens of fruit, etc. overwhelmed with the vastness unapporachableness of the great guarded ocean of sunny plants. The Magnolia grandiflora I had seen in Georgia, but its home - its better land is here. Its large dark green leaves, glossy bright above and rusty brown beneath, gleam and mirror the sunbeams most gloriously among countless flower heaps of the climbing, smothering vines. Bright, too, in fruit and more tropical in form than the orange, it speaks itself a prince among its