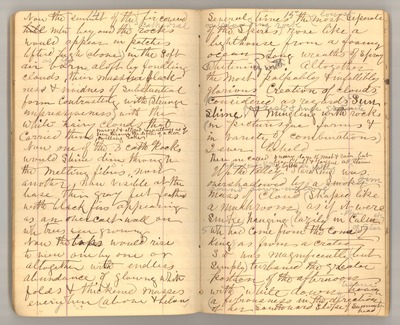 14 Now the summit of the fir covered [hill] mtn [bey] and the [cathedral] rocks would appear in patches lifted high (above) in the Soft air as if borne aloft by fondling clouds, their massive blackness & vividnes of Substantial form Contrasting with (strange impressiveness) with the white hairy clouds that Carried them, wavered & altered in outlines as if seen through the depths of a clear [swilling] lake. Now one of the 3 Cath Rocks would Shine dim through the melting [fibres], now another, now visible at the base. Thin gray [felt] feathers with black firs appearing as an overcast wall on wh trees were growing. Now the tops would rise to view one by one or altogether with endless abundance of glowing white folds & thickened masses everywhere (above & below)

Several times the (most seperate of the spires) lowest outstanding rock rose like a lighthouse from a foamy ocean whited with Long wreaths of spray. Altogether the most palpably & infallibly glorious Creation of clouds (considered as regards) Sun Shine, forests & huge granite & mingling with rocks (in picturesque farms & in variety of combinations) I ever beheld. These are called dreary days of mist & rain but beautiful & joyful as [sum] storms when only floods of light are falling. Up the Valley Starr King was overshadowed by a [smoky] dim [round down-curling] mass of cloud (Shaped like a mushroom) as if it were smoke [wh had come from the Cone (of Star King [)] as from a crater hanging (lazily ) in the calm sky. S D was magnificently (but Simply) [turbaned] the greater portion of the afternoon with white downy [tissue] ([having] (a fibrousness in the direction of her Southward slope of Summit head)