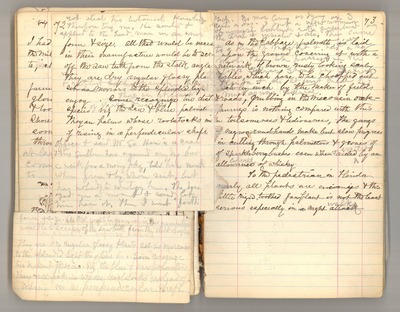 not steal his botanical knowledge. Therefore try me. He smiled and applied to the head man in an inner [cont.] form and size. All that would be necessary to their manufacture would be to scrape off the saw teeth from the stalk-angles. They are dry, angular, glossy plants, set as mirrors to the splendid light they live in. Some recognize two distinct species, viz. the blue and saw palmettos. They are palms whose root-stocks instead of rising in a perpendicular shaft [cont.] office, and said, “Mr. So … Here is a case. This gentleman has inquired every day for a week for a money package, told how much, where from, and by whom sent, but has nobody to identify him.” The boss eyed me a moment, and said, “Let him have it.” Then I went forth rich. No more living or dying on 3 cents a day. I met a negro woman of immense latitude with gingerbread on the street, and invested and ate. Then came to a kind of market and had a sq. meal. Then took passage on the Sylvan Shore for Ferdinandina, Florida, and ate at first meal too much, which was natural. as in the cabbage palmetto, are laid upon the ground, covering it with a network of brown, rusty looking, scaly cables, which have to be chopped out by the maker of fields and roads; grubbing in the Wisconsin oak-openings is nothing compared with this in toilsomeness. The gangs of negro road-hands make but slow progress in cutting through palmettos and groves of sparkleberry bushes, even when excited and aided by a liberal allowance of whisky. To the pedestrian in the Florida nearly all plants are enemies, and this little rigid, toothed fan plant is not the least serious, especially in night walks.