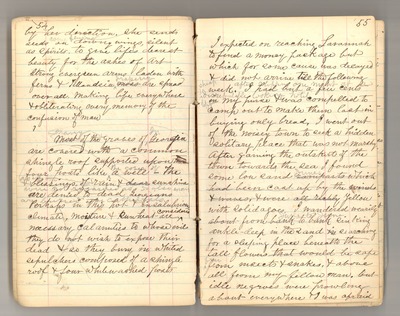 seeds come flying on downy wings, silent as spirits, to give life’s dearest beauty for the ashes of art. Strong evergreen arms laden with ferns and Tillandsia drapery are spread over all, making life everywhere and obliterating every memory of the confusion of man. In Georgia many graves are covered with a common shingle roof supported on four posts like the cover of a well as if rain and sunshine were not regarded as blessings. So many are buried in cathedrals. Perhaps in this hot and insalubrious climate, moisture and sunheat are considered necessary calamities to whose evils they do not wish to expose their dead, and so they bury [them] in whited sepulchers composed of a shingle roof and four white-washed posts. I expected on reached Savannah to find a money package, but which for some cause was delayed and did not arrived till the following week. After stopping one night at a cheap disreputable-looking hotel [I] left. I had but a few cents in my purse and was compelled to camp out to make them last in buying only bread. I went out of the noisy town to seek a hidden solitary place that was not marshy. After gaining the outskirts of the town toward the sea I found some low sand dunes yellow with solid agoes. I wandered wearily from dune to dune, sinking ankle-deep in the sand, searching for a sleeping place beneath the tall flowers free from insects and snakes and above all from my fellow man, but idle negroes were prowling about everywhere and I was afraid.