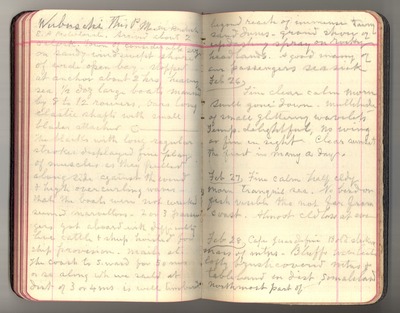 Wubuschi this afternoon, in British E. A. Protectorate. Arrived about two o’clock. Town of considerable size, situated on the sandy wind-swept shore of a wide open bay. Stopped at anchor about two hours. Heavy sea. A half dozen large boats manned by eight to twelve rowers, oars long elastic shafts with small blades attached. The black boatmen with long regular strokes displayed fine play of muscles as they pulled alongside against the wind and high over-curling waves. That the boats were not wrecked seemed marvelous. Two or three passengers managed to get aboard with difficulty. Live cattle and sheep were hoisted aboard for ship provisions. So also the mail, etc. The coast to the southward for fifty miles or so, along which we sailed at a distance of three or four miles, is well timbered beyond reach of immense yellow sand dunes. The waves along eh shore on the rocky headlands made a grand show of up-dashing spray. A good many of our passengers seasick. Feb. 26. Fine, clear, calm morning. Swell gone down. Multitudes of small glittering wavelets. Temperature delightful. No wing or fin in sight all day. Clear sunset., the first in many a day. Feb. 27. Fine, calm, half cloudy morning. Tranquil sea. No life visible outside the ship, though we are not far from the coast. Almost cloudless at evening. Feb. 28. Off Cape Guardifui. Bold striking mass of mountains. Bluffs wave-beaten. Lofty brush-covered mountains and table-land in the distance. This is the north-most part of Somaliland.