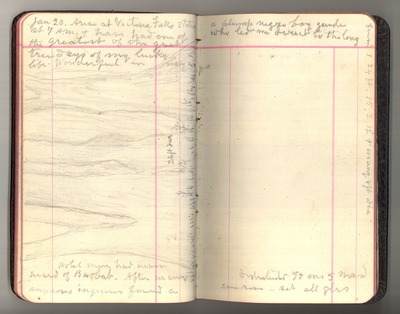 Jan. 20. Arrive at Victoria Falls station at 7:00 A.M. and have enjoyed one of the greatest of the great tree days of my lucky life. Wonderful in many ways. Inquiring at the hotel if there were any baobabs in the neighborhood, the manager said that he had never heard of a baobab. I explained that it was a large tree, one of the largest of the great trees of the world, and that I had heard that some of them grew at no great distance from here. After many anxious inquiries I found a plump negro boy guide who led me direct to the long-dreamed -of African Adansonia digitata. I found a large number at a distance of only about a mile or a mile and a half from the head of the Falls, and not over half a mile back from the bank of the river. I discovered specimens showing their different forms, varying from twelve to twenty-four feet in diameter, most of them about seventy-five to ninety feet high. Very wide-spreading, the main branches very large, some of them four to six feet in diameter, gradually dividing into comparatively slender branchlets; many of them drooping, and well-clad with rather pale-green five to seven or even nine-fingered leaves. I found a few of the fruits that had fallen on the ground and also a few of the wilted flowers. The flowers are white, circular, and about six inches in diameter. This grand tree was first discovered by Michael Adanson of the West Coast near Sierra Leone. It also extends considerably to the north at S.L. at the head of Senegal River. I afterwords found it in great abundance at Mozambique, Zanzibar, Desersalaan, Panga, and Mombasa on the East Coast. A red-flowered species A. Madagascariensis is found on the island of that name. A third species has been found in Australia, A. Gregorii. It is often called monkey-bread tree. Also cream of tarter tree, from the pleasantly acid juice of the fruit furnishing a refreshing drink. This wonderful tree belongs to the malvaceae. The timber is so soft and spongy that it has no merchantable use, though I was informed that large rain-water tanks were sometimes dug in the broad body of the living tree.