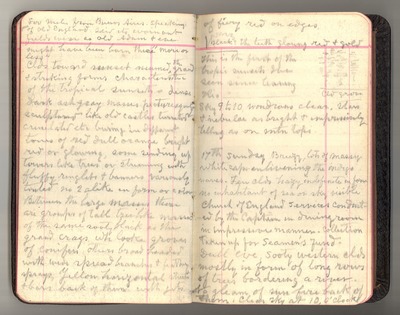 800 miles from Buenos Aires, speaking of Old England, said that its worn-out filed were so old that Adam and Even might have been born there more or less. Clouds toward sunset assumed the grand and striking forms so characteristic of tropical sunsets. Dense, dark, ash-gray masses, picturesquely sculptured like old castles, turreted, etc., burning in tones of red, dull orange, bright red or glowing, some sending up towers like trees, or streaming with fluffy ringless and banners, variously tinted, no two alike in form or color. Between the large masses there are groups of tall, tree-like pillars, not unlike pines or spruces, of the same sooty black as the great crags, looking like groves of conifers of different species. Others broad-headed, with wide-spread feathery branches and sprays like palms. Yellow horizontal sheath and bars back of them, with jets or fiery red on the edges. Some serrated, the teeth glowing red and gold. This is the first of the tropic sunsets I have seen since leaving Rio. Sky from nine to ten in the evening wondrous clear. Stars and nebulae as bright and impressively seen as when viewed from mountain tops. Dec. 17. Sunday. Breezy. Lots of massy whitecaps enlivening the indigo waves. Few clouds, hazy and indefinite in form. No inhabitants, sea or sky, visible. Church of England services conducted by the Captain in the dining room, in impressive manner. Collection taken up for the Seamen’s Fund. Dull evening. Sooty western clouds, mostly in form of long rows of trees bordering a river. No gleam of sun fire back of them. All the sky clear at 10:00 P.M.