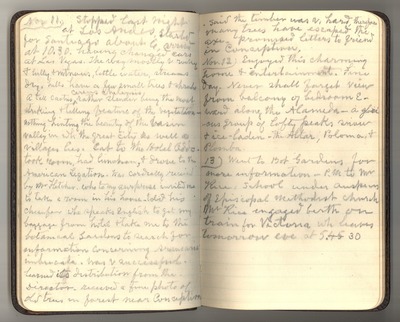 Nov. 11. Stopped last night at Los Andes. Started for Santiago about six o’clock. Arrived at 10:30 A.M. having changed cars at Las Vegas. The way mostly rocky and hilly or mountainous. Little water. Most of the stream channels dry. On the hills, however, there are a few small trees and shrubs, can the tall cactus, Cereus Chilensis, rather slender, which forms the most striking and telling feature of the rather scrawny vegetation, giving no hint of the beauty and fertility of the basin valley in which the great city of Santiago and its neighboring villages lie. From the railway station I took a cab to the Hotel Oddo, engaged a room, had luncheon, and drove to the American Legation. On the strength of my credentials from President Taft I was cordially received by Mr. Fletcher, Minister Plenipotentiary from the U.S., who, to my surprise, invited me to take a room in his house, directed his auto driver, who speaks English, to get my baggage from the hotel and take me to the Botanical Gardens to search for information concerning Araucaria Embracata. The director of the Gardens took pains to give me a general description of his distribution so far as known. He also presented me with a fine photograph of old trees, which he said must have come from somewhere near Conception, but he had never seen any of the trees of this species growing naturally, and of course could give me no definite information as to how to reach them. He said that he had heard that the timber was very hard and was seldom made use of. Therefore many had escaped the axe. He promised me letters of introduction to friends in the town of Conception. Nov. 12. Enjoyed this charming home and entertainment. The Legation is a magnificent house situated on the Avenida, famous for its length and beauty. The house is full of good books. Mr. Fletcher is not only a very accomplished gentleman, but kind. Told me the house and everything in it was mine and to stay as long as I could. Never shall I forget the views of the snowy Andes from the balcony of my bedroom. Glorious group of lofty mountains, snow-laden and ice-laden. The principal peaks are the Altar, Poloma, and Polomba. Nov. 13. Went again to the Botanical Gardens in search of more definite Ar. Information. In the afternoon to Mr. Rice’s school which is under the auspices of the M.E. Church. Mr. Rice, who has traveled much down the coast, informed me that a Mr. Smith, a lumberman, owning several saw-mills, and well acquainted with the forests to the southward, was the most likely man to direct me to the woods that I was in search of, and kindly telegraphed Mr. Smith to meet me at the train, at Victoria. Engaged a berth for me on the train which leaves Santiago in the evening at 5:30.